US AM Digest: DXY Gains Gather Pace as US 10yr Yield Closes in on 3%

USD: Gains in the USD-index have continued to gather pace as the US 10yr treasury yield looks to hit 3%, reaching a high of 2.996%. This had been led EURUSD and USDJPY, in which the latter pushed through 108.00 amid easing political tensions on the Korean Peninsula. President Trump stated over the weekend that North Korea agreed to suspend missile testing, sending an encouraging sign of denuclearization.

EUR: More tepid data out of the Eurozone this morning with manufacturing PMI survey falling to the lowest level in 14-months, while IHS Markit expect Eurozone GDP growth will remain at 0.6% for Q2. This also fits in-line with recent comments from President Draghi who stated that Euro-Area growth may have peaked. Eyes on the ECB meeting (Thu), potential for downside risks given recent soft data, however, the ECB are largely expected to stick to the script.

GBP: The Pound has seen a notable decline, since BoE Governor Carney threw a May rate hike into doubt, alongside a spate of uninspiring data points last week (namely inflation) which has seen market pricing fall from 80% to around 50%. GBPUSD is somewhat vulnerable with the latest CFTC data showing GBP net long positions had rising to the highest level since mid-2014 in the week to April 17th , as such, GBPUSD running into support at 1.3950, while stronger support is seen at the psychological 1.3900 handle. Focus may shift to the latest on Brexit as MPs debate the Trade and Customs Bill with a technical vote, whereby a defect could potentially threaten PM May’s leadership.

AUD: The Aussie slipping some 0.4%, to trade at fresh 2018 lows amid the rising USD-index, while softening commodity prices have also hampered the Australian Dollar. Elsewhere, the lift in US bond yields also sees widening spreads between the US and Australia, which in turn could likely see AUDUSD pressured further.AUDUSD currently eyingtrendline support dating back from January 2016 at 0.7610, the next significant support in the pair seen at 0.7500.

US preliminary PMI readings for April due at 13:45GMT, which is expected to be somewhat mixed with the services reading seen ticking up slightly to 54.1 from 54, while the manufacturing component is estimated at 55.2, down from 55.6. For CAD traders, all attention will be placed on BoC’s Poloz and Wilkins who are to testify at the House Committee. Potential for Poloz to maintain a cautious tone, echoing much of the comments from the MPR and post-decision press conference. Additionally, CAD slightly weaker following comments by the BoC Governor in which he was unfazed by inflation running above target. 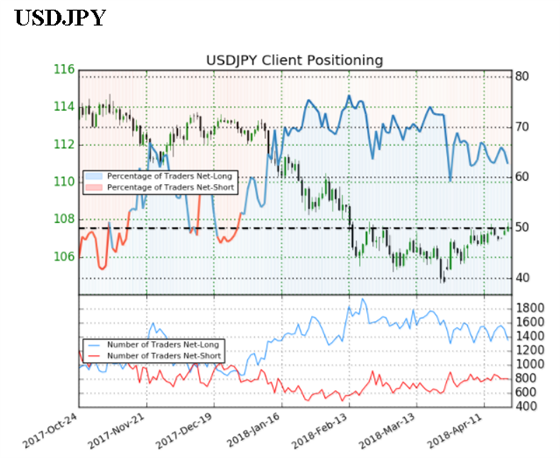 We typically take a contrarian view to crowd sentiment, and the fact traders are net-long suggests USDJPY prices may continue to fall. Positioning is more net-long than yesterday but less net-long from last week. The combination of current sentiment and recent changes gives us a further mixed USDJPY trading bias.