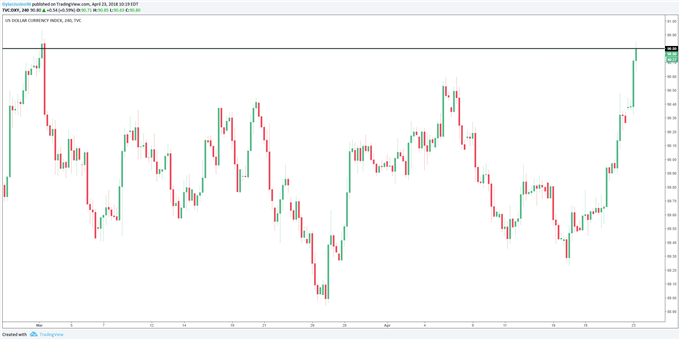 - US Manufacturing Purchasing Managers’ Index rose to 54.8 from 54.2 previously

- US Services PMI exhibited strength at 54.4 beating the expected 54.1 figure; manufacturing followed suit at 56.5 versus 55.2 expected

Manufacturing and Services Rise Above Expectations

This morning, IHS Markit reported that private sector output rose substantially in April as US output saw steep growth in new orders. In April, the composite Purchasing Managers’ Index figure came in at 54.8 from 54.2 in March. IHS noted, “Flash U.S.Composite PMI Output Index indicated a faster upturn in business activity across the private sector,driven by accelerated growth at bothmanufacturing and service sector firms.” Particularly, new orders and backlogs of work exhibited strength coming in at the highest level since March 2015. In addition, the outlook for business activity over the next 12 months rose the highest since May 2015.

The Services PMI figure also was a pleasant surprise to markets coming in slightly over the expected 54.1 estimate at 54.4. This marked the twenty-sixth consecutive month of output expansion in the services sector.

Manufacturing also expanded with the services sector. Markets were expecting the index to come in at 55.2 but the actual print was higher at 56.5. New manufacturing orders sped up to the quickest pace in over three-and-a-half-years.

See our longer-term forecasts for the US Dollar, Euro, British Pound and more with the DailyFX Trading Guides.

Increased Orders Did Not Lead to Employment Growth

Although PMI came in strong for April, employment growth as a result did not. IHS reported: “the rate of job creation eased to an eight-month low as firmsreportedly pushed for greater efficiency.” Price pressures within factories have also intensified as a result of a pickup in orders. Input cost inflation picked up the fastest since June 2011. Notably, “cost increases werepartly linked by producers to the introduction of tariffs.” Although, IHS’ view is that hiring remains robust ass firms struggle to meet demand.

DXY has been on a tear since the start of the trading week. The dollar index nearly broke above the March 1st high at 90.87. It has not quite broken above that level today but PMI print was enough to see a continued uptrend in the dollar. At the time that this was written DXY traded at 90.80.