What’s the secret ingredient? Why do some traders stand out? Find out in the DailyFX deep, deep dive into The Traits of Successful Traders

Asian stocks were mostly lower on Monday as falls for US tech stocks and worries about higher US interest rates sapped optimism.

Apple slipped Friday on analyst notes worrying about how many new iPhnes the tech giant might sell this year. Meanwhile shorter US Treasury yields rose to highs not seen since 2008 on the prognoses that the Federal Reserve will press on with monetary tightening.

Sure enough, the Nikkei 225 slipped by 0.3%, with most other Asia Pacific bourses lower too. Australia’s ASX 200 was a standout performer. It closed higher but only by 0.3%.

Those higher yields supported demand for the US Dollar which was higher through Monday’s session against most widely-traded rivals. However, AUD/USD found a floor following sharp falls last week. It has made some upward progress but has yet to approach what now looks like key near term resistance derived from Friday’s falls. 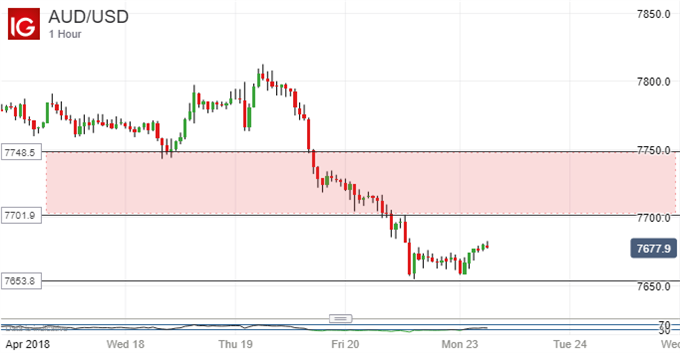 The market is probably focused on Australian Consumer Price Index data which is due on Tuesday. The markets expect that it will edge up to 2%, which would put it inside the Reserve Bank of Australia’s 2-3% target band for the first time since January, 2017.

Gold prices slipped as they often do when US yields gain, while crude oil prices were lower as investors mulled news of increased US drilling.

Still to come on Monday are service-sector Purchasing Managers Indexes from around the Eurozone and from the US. Investors will also get a look at US existing-home sales and European Central Bank executive board member Benoit Coeure will speak in Frankfurt.