Asian stocks were mostly higher on Thursday, following a rather mixed day on Wall Street. There, US Stocks swung between losses and gains as US President Donald Trump downplayed hopes of reentering the TPP agreement. Just before Tokyo open, Mr. Trump and Japan’s Prime Minister Shinzo Abespoke at a news conference after having talks about matters such as North Korea and international trade.

While Trump showed his disdain for the TPP earlier, he showed us that he is keener on having bilateral deals. The former is what Shinzo Abe is more interested in though, but he said that they will “expand trade and investment to benefit both nations”. Japanese stocks took the news rather well with the Nikkei 225 rising as much as 0.4 percent.

Meanwhile South Korea’s Kospi was also up, boosted by gains in the technology sector. Chinese shares were also following the rise in sentiment, with the CSI 300 and Shanghai Composite up as much as 1.3% and 0.97% respectfully. These gains occurred despite some rather intense developments out of Hong Kong.

The Hong Kong Dollar, which appreciated rapidly, was arguably the most volatile currency of the session. Hong Kong’s Monetary Authority (HKMA) was reported increasing purchases of their local currency yet again. This amounted to about HK$17.631 billion. In addition, the three-month HKD HIBOR rose two basis points to 1.33661% which was the highest since December 2008. These were moves taken to defend the local currency’s peg to the US Dollar.

Another currency that swung was the Australian Dollar. At first, it was negatively impacted by a worse-than-expected local jobs report. However, the pickup in sentiment as Asian shares climbed helped to alleviate some of that pressure and it was not long before it reversed all of its losses. The anti-risk Japanese Yen tumbled as the markets seemed to have brushed off the aggressive actions from the HKMA. 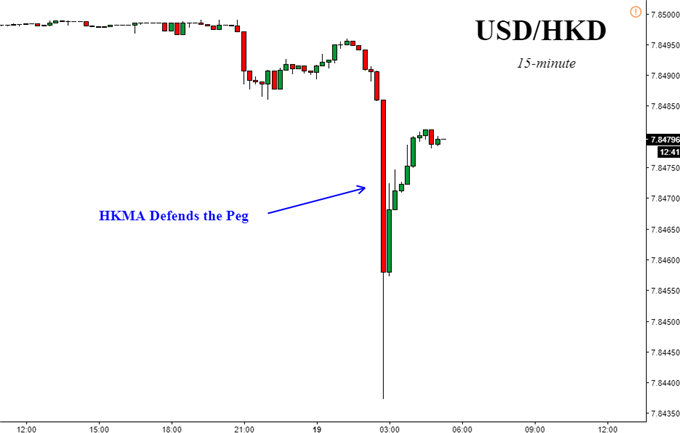 Looking ahead, keep an eye out for remaining Fed commentary that may continue to impact risk trends. If policymakers continue echoing positive developments on economic growth, than stocks could benefit once more. 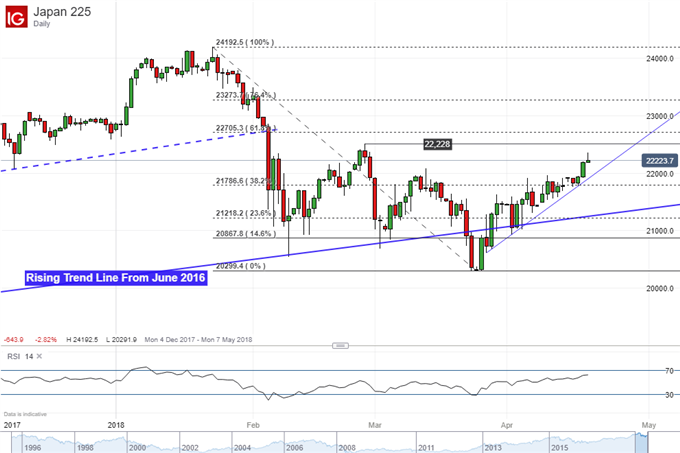 The Nikkei 225 has been pushing higher in an uptrend since bottoming in late March. Interestingly, the index fell below a long-term rising trend line from June 2016. However, the breakout was false. From here, near-term resistance is 22,228 which is the February 27th high. A push above that exposes the 61.8% Fibonacci retracement at 22,705. Immediate support is the short-term ascending line from the end of March. A break below that will place the 38.2% level at 21,786 as the next target.