- The Bank of Canada (BoC) left the overnight lending rate unchanged at 1.25%, as was widely expected

The Bank of Canada has held the overnight lending rate at 1.25% for the second meeting in row this morning. Though this was largely expected as markets priced in an 80% chance of the Central Bank holding going into today’s meeting.

Looking ahead, markets are losing faith in a second 2018 hike in the second quarter. At the May meeting, the final meeting in 2Q, the probability stands at just 50%. Although, the probability of a hike in July stands at 76.5%. But of course, much can happen between now and then to revise that expectation.

The BoC released their monetary policy report at this month’s meeting. We have noted the most important points below:

In addition, here’s a list of recent economic data that came out of Canada since the BoC last meeting in March:

The BoC also estimated that economic activity is should come in at 1.3% for Q1 but rebound for 2Q to 2.5%. The Central Banks also expects disruptions of exports to dissipate accounting for the rebound in economic growth for the second quarter. In addition, below is a summary table of the BoC’s inflation projections: 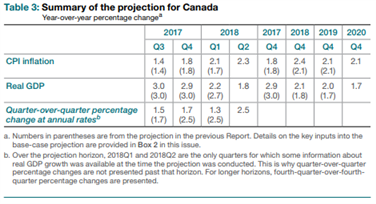 The Bank did not forecast the Canadian Dollar exchange rate but does project USD/CAD to remain at around $0.78, versus $0.79 in January and $0.81 in October. Other projections include a modest pick-up in wages, inflation running close to 2%, and moderate expansion in business investment.

Finally, The Central Bank stated outright that “a wide range of outcomes are still possible for the North American Free Trade Agreement” (NAFTA). Trade has been a consistent concern recently. An increase in those concerns could lead to a “shaper-than-expected tightening of financial conditions.” This may have been at the forefront of the Central Bank's decision today. 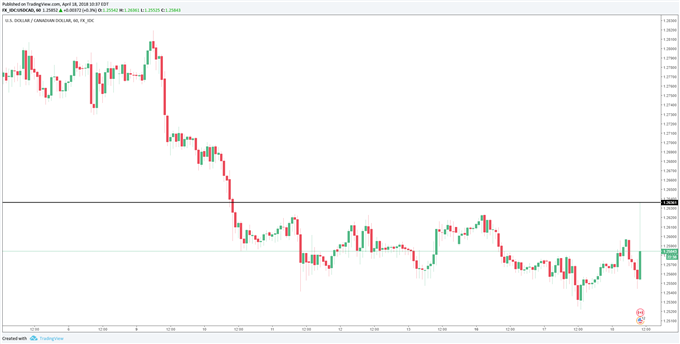 Today’s monetary policy meeting yielded a favorable outcome for the dollar. Buyers came in strong pushing USDCAD to 1.2636. Shortly after, sellers pushed Loonie down to 1.2584. In all, a less-hawkish BoC disappointed CAD bulls.