The Australian Dollar was cautiously lower after mostly in-line Chinese GDP data, but AUD/USD may be at risk of a more pronounced move higher. In the first quarter, China’s economy grew 6.8% y/y as expected, the same pace as in the fourth quarter of last year. Quarter-over-quarter, the outcome was worse-than-expected at +1.4% versus +1.5%.

What was more disappointing, and probably the cause of Aussie Dollar weakness, were the soft industrial production statistics. In March, it rose only 6.0% y/y versus 6.3% expected. That was the weakest outcome since August. Meanwhile, retail sales data beating estimates across the board failed to inspire much confidence and did not counter the negativity from the industrial production figures.

With China being Australia’s largest trading partner, data out of the world’s second largest economy can sometimes have knock-on effects on the latter. However, the Reserve Bank of Australia is standing its ground on monetary policy for now. The central bank has hinted that it is in no rush to raise rates. In fact, before the Chinese GDP figures crossed the wires, we had minutes from the RBA’s April rate decision. The central bank reiterated its usual tone, adding that current tariffs are unlikely to impact on global trade.

With that in mind, the sentiment-sensitive Aussie Dollar will probably be more interested in risk trends in the near-term. Ahead, US President Donald Trump will have a meeting with Japan’s Prime Minister Shinzo Abe about matters such as North Korea and tariffs. Then, on early Thursday we will get Australia’s March employment report. Both of these events may inspire volatility in the currency. 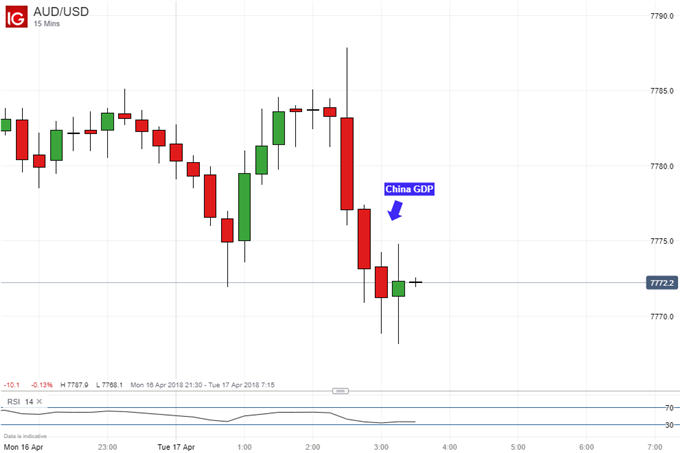 On a daily chart, AUD/USD has pushed above a falling wedge bullish reversal pattern as expected, hinting that the pair may continue heading higher in the near-term. Form here, immediate resistance stands as the 50% midpoint of the Fibonacci retracement at 0.7818. A push above that exposes the 38.2% level at 0.7893. Meanwhile, immediate resistance is the 61.8% retracement at 0.7743 which is also closely aligned with the upper line of the wedge. 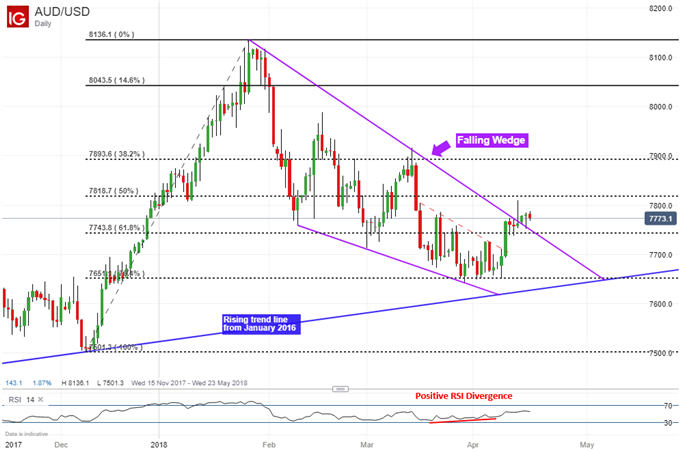