Find out what the #1 mistake that traders make is and how you can avoid it!

Asian stocks were mixed on Monday with last weekend’s airstrikes on Syria by the US, UK and France still very much on investors’ minds.

The lack of anything but verbal protests from those opposed to the action, notably Russia, helped steel market nerves as a new trading week got under way. Hopes that the apparently limited nature of the Western operation will not lead to escalation were also high.

The Nikkei 225 ended up 0.3%, with the ASX 200 and Kospi also in the green. However, Chinese stocks lagged both in Hong Kong and on the mainland. Still, despite Syria and the recent, ongoing trade snarling between Beijing and Washington, investors are still looking with hope toward Wall Street’s upcoming earnings season.

The US Dollar slipped a little further against the Japanese Yen as Asia Pacific trading desks came in and took a view on the strikes. However risk appetite on the whole held up fairly well. The Australian and New Zealand Dollars saw quite steady sessions, although the latter did slip a little against the greenback despite some ostensibly quite hawkish weekend commentary from new Reserve Bank of New Zealand Governor Adrian Orr.

He said that the RBNZ’s new mandate to target employment growth would not take focus away from its price-stability goal.

NZD/USD seems to have stalled just below this year’s peaks –made in mid-February- having revisited them last week. 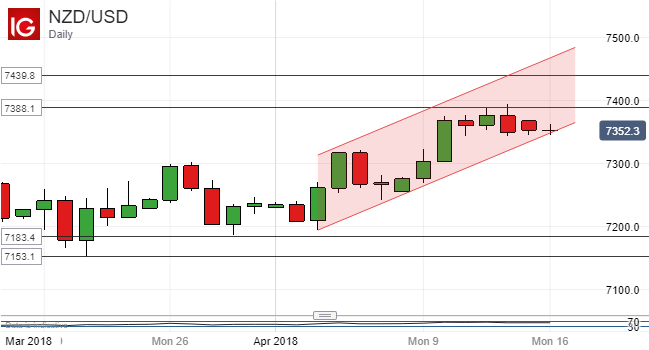 Politics were in focus in Japan where scandal-buffeted Prime Minister Shinzo Abe commands his lowest ever approval ratings, casting doubt on the future of his economic reform program.

Gold prices initially edged up but couldn’t sustain their gains. Crude oil prices fell as the markets became more relaxed about Syria and eyed more production increases in the US.

Still to come Monday are advance US retail sales numbers for March, the Empire manufacturing survey and the housing market index from the National Association of Home Builders.