The Singapore Dollar appreciated as much as 0.3 percent against its US counterpart after April’s Monetary Authority of Singapore (MAS) policy statement. It should also be noted that the country’s GDP figures crossed the wires mostly in-line with expectations simultaneously. But that clearly wasn’t what surprised traders in the first place.

Going into the announcement, the markets were expecting the MAS to maintain its neutral stance of 0% appreciation in the nominal effective exchange rate. Keep in mind, unlike conventional central banks which largely use short-term rates to manage the economy and inflation, the MAS targets the trade-weighted exchange rate index or TWI.

Unexpectedly, the central monetary authority increased the slope of the currency band from zero percent prior. The policy stance shifted to a modest, gradual appreciation of the Singapore Dollar to ensure medium-term price stability. They will also maintain the width and center of the currency band. The MAS said that upward pressures on core inflation are expected to persist over the course of this year and beyond.

Since their previous monetary policy decision back in October, there have been some trade disputes between the US and China. In response to this, the MAS highlighted that rising tensions on this front pose as a downside risk to the growth outlook. With that in mind, they will continue to closely monitor the situation.

Speaking of the situation, US President Donald Trump mentioned on Thursday that he might consider rejoining the Asia/Pacific TPP. In addition, he also gave us an update saying that talks with China are going well. However, newswires reported during the early hours of Friday that he has yet to make a decision on how to respond to the Syria situation. More of the same for the latter developments could benefit the Singapore Dollar while the latter could leave it at risk if sentiment declines as a result of the outcome. 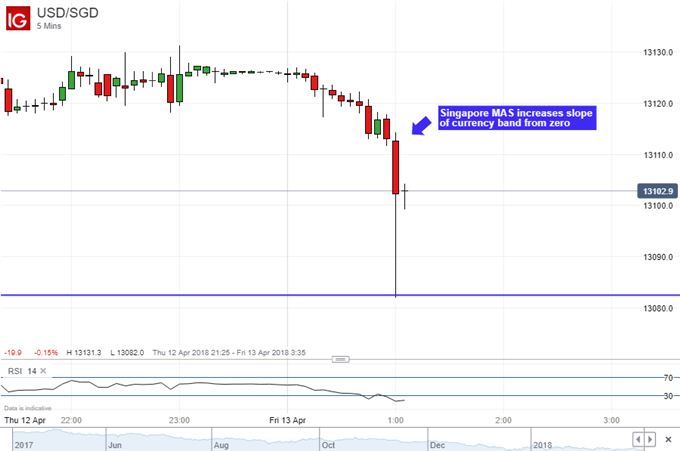 On a daily chart, USD/SGD seems to be getting stuck around the October 2017 falling trend line after trying to push above it. While it has passed the line on a couple of occasions, further progress was limited with the pair pulling back. As of this market alert, it remains comfortably within the 1.3191 resistance line and the 1.3081 support line. 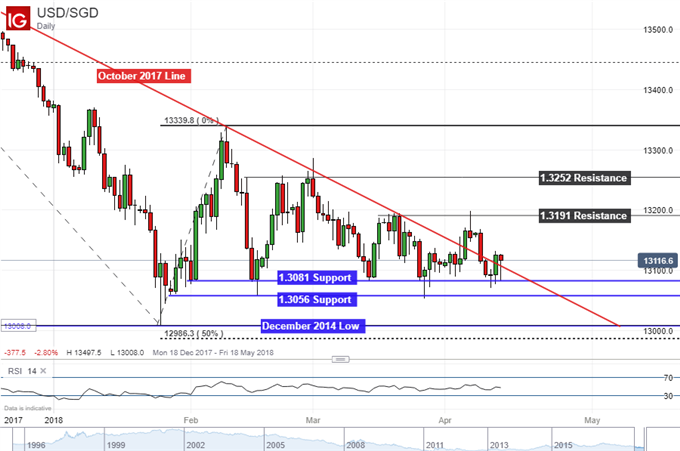