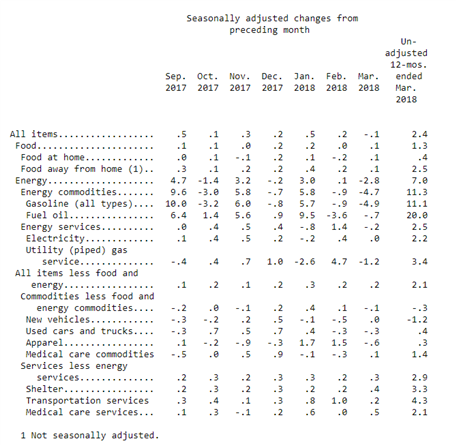 - Headline CPIrose by 2.4% YoY in March, in line with expectations

- Core inflation followed suit also coming in as expected at 2.1%

This morning’s inflation data from the Consumer Price Index (CPI) did not leave markets guessing as most prints were in line with expectations. In March, headline CPI and core CPI (all items exluding food and energy) matched expectations at 2.4% and 2.1% respectively. Both prints are further proof that inflation is on the rise. The headline figure was highest recorded since March 2017, while Core CPI reached its highest level since February 2017. In addition, last month headline inflation ran significantly above the 1.6% average annual rate recorded over the past 10 years. However, on a month-over-month basis, headline CPI fell due to a decline in the gasoline index which more than offset rsis in the shelter, medical care, and food indices.

Lately, energy prices have been one of the lead contributors to higher inflation. However, this month energy lagged while the indexes for shelter, medical care, and airline fares all rose. Although, the indexes for apparel (retail), communication and used automobiles fell along with energy prices. Below is an overview of all prices changes recorded through September 2017:

Today’s CPI report made a negligible contribution to rate hike expectations as implied by the fed funds futures rates. This may be because markets have already priced in higher inflation met by higher interest rates. But at the very least today’s price data does provide the Fed with more basis to hike rates.

Below is a list of economic releases that has pushed the dollar slightly higher: 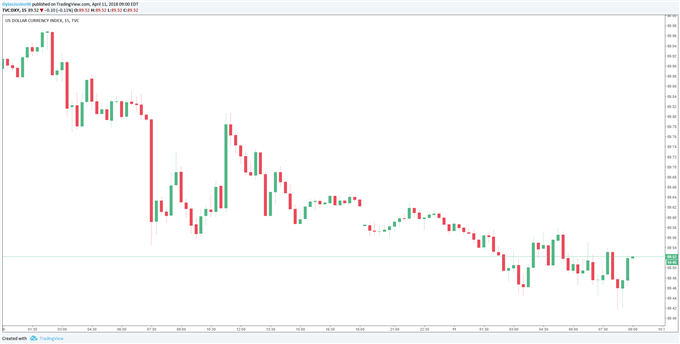 We can see that since yesterday DYX has traded lower following Trump’s comments on Syria. Comparatively, CPI has had a limited imact on the dollar. Traders appear to be skittish as trade and social tensions add risk and uncertainty. At the time that is was written DXY traded at 89.52.