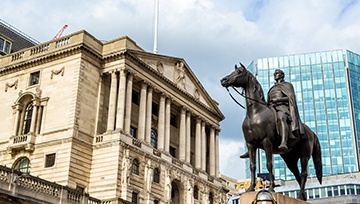 - UK retail sales rose strongly in March, according to a trade body, and Bank of England policymaker Ian McCafferty said the central bank should not delay raising interest rates.

GBPUSD continues to recover from the losses recorded in the last four days of March but is struggling to gain more ground despite firm UK economic data and hawkish comments from Ian McCafferty, a member of the Bank of England’s rate-setting Monetary Policy Committee.

Figures from the British Retail Consortium showed like-for-like retail sales climbing by 1.4% year/year last month when a fall of 0.1% had been predicted. That followed Monday’s news that house prices, as measured by the Halifax mortgage lender, jumped by 1.5% month/month in March, well above the 0.1% rise forecast.

Against this background, McCafferty told Reuters in an interview that the Bank of England should not delay raising interest rates. He pointed to the possibility of higher pay rises and the recent strong pickup in the world economy, according to the newsagency, but the response in GBPUSD was modest.

From a technical viewpoint, the previous support line shown on the chart above may now be acting as resistance. More fundamentally, McCafferty was one of the two members of the nine-strong MPC to vote for a rate rise last month so his hawkish comments were not unexpected.

Nonetheless, GBPUSD might have been expected to rally more strongly as traders wait for a deluge of UK data tomorrow on trade, industrial production and construction that could set the direction for the pair’s next move.