US NFIB Dips From Near Record Levels, USD and S&P 500 Unmoved With Focus on China-US Trade Spat

US News and Talking points

US NFIB Small Business Optimism Falls From Near Record Levels

US NFIB Small Business Optimism index for March fell by 2.9 points to 104.7 from last month’s reading of 107.6 (Second highest level on record), while also missing expectations of 107.0. However, the index remains above the key 100 level which is consistent with an economic expansion. 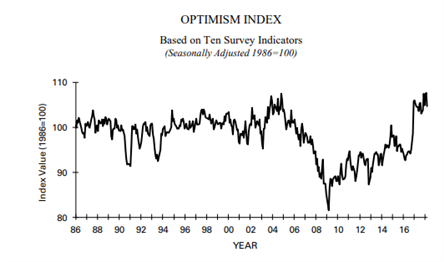 In terms of the individual components, quality of the labour market remained the biggest problem for a third consecutive month with 47% of owners reporting few or no qualified applicants for the positions they were trying to fill, subsequently hinting that slack in the labour market remains. Following the Trump administrations tax overhaul last year, optimism over taxes is at its best level since 1982 with taxes receiving the fewest votes as the number one business problem having fallen from 22% in November to 13%.

Optimism remains solid for small firms amid tax cuts beginning to impact firms directly and positively impact customers, while GDP is seen remaining strong which could spur more capital investment. NFIB President Duggan notes that smalls businesses have become so optimistic that they feel confident enough to raise wages and invest in their business.

USD-index and S&P 500 largely unmoved following the release given that this data does not typically have the propensity to instigate significant price action.

Optimism among small businesses could take a dip in the months ahead on trade war fears. The survey had been conducted during March and given that the fear over trade wars began to grow towards the end of the month. As such, this may be a factor to look out for in the coming months that may dent confidence among small businesses due to the direct impact that proposed tariffs could have, particularly in the agricultural sector. As a reminder, China recently proposed to place tariffs of up to 25% for US agricultural goods. 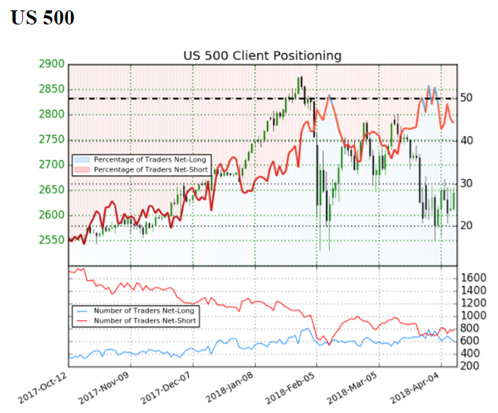 We typically take a contrarian view to crowd sentiment, and the fact traders are net-short suggests US 500 prices may continue to rise. Traders are further net-short than yesterday and last week, and the combination of current sentiment and recent changes gives us a stronger US 500-bullish contrarian trading bias.