Is there a secret ingredient? Find out in the DailyFX deep, deep dive into The Traits of Successful Traders

The official balance of payments on the current account for February was JPY2076 billion (US$19.4 billion), with the trade balance at JPY188.7 billion ($1.8 billion). Both were below forecasts which centered on JPY2196 and JPY249 respectively.

The lack of currency movement could be accounted for by the very tenuous link between these numbers and Japanese monetary policy, and also by widespread jitters about a trade war between Washington and Beijing. These have supported perceived haven currencies such as the Yen for weeks and continue to do so. 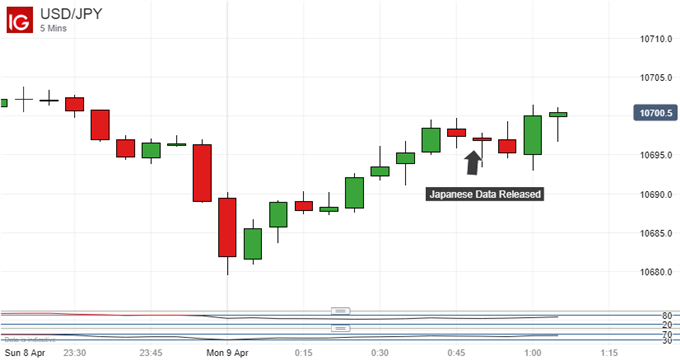 Moreover, while the data suggest some positive effects from Japan’s overseas investment, the long Chinese Lunar New Year break seems to have hit exports in that direction. This is inconvenient for Japan Inc. but hardly hints at any broad domestic weakness.

The Japanese economy is doing reasonably well by most measures, with inflation’s pickup especially noticeable. The consumer price index is rising at a rate not seen since early 2015, even if it remains well below the Bank of Japan’s 2% target.

On its daily chart, USD/JPY remains well clear of the long downtrend channel which had marked much of 2018’s trade until it was broken to the upside in late March. However, the wide range trading seen since seems to have logged another failure at the top, with April 5’s intraday peak of 107.46k matching almost exactly the previous range top made on February 27. 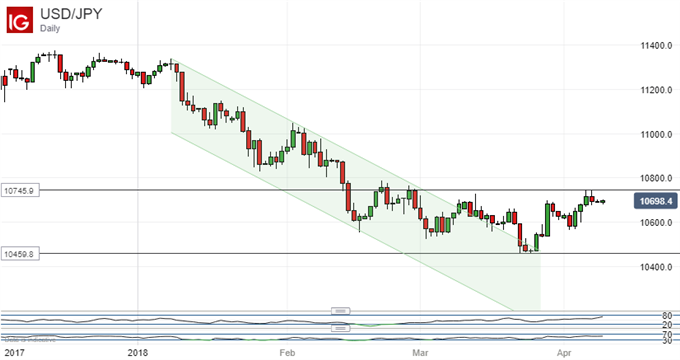