Asian stocks managed to shrug off both trade tensions and declines on Wall Street Friday to post broad gains as a new week kicked off. The session was largely free of major economic news but, all the same, investors in the region still seem hopeful that the increasingly bellicose rhetoric around tariffs from both Washington and Beijing will not morph into a full-scale trade war.

The Nikkei 225 ended up 0.5%, with the ASX up 0.4% and all Chinese indexes in the green as their closes approached.

The US Dollar was steadier Monday, having retreated last week as those trade tensions ratcheted up. It gained against the Japanese Yen, although the latter looks quite firm on its broad, daily chart. USD/JPY remains above the downtrend channel which marked trade for much of this year but seems to have failed once more at the top of the broad resistance channel which has been in place since.mid-February. 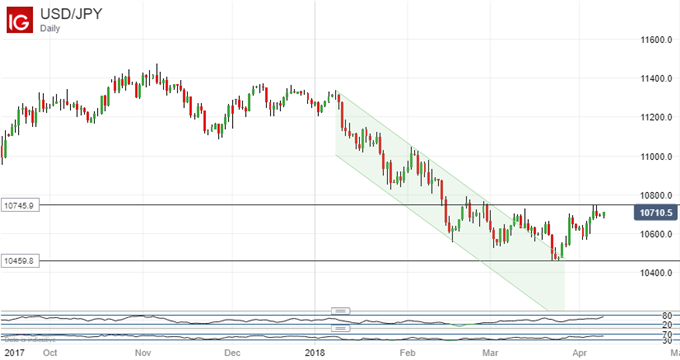 The day’s most significant Asian economic data were the Japanese trade balance and current account numbers. They seemed to have been hit to some extent by the long Chinese New Year break but investors took their various expectation-misses in stride.

Gold and crude oil prices were steady through the session. The nervous watch for trade headlines seems to be supporting the former while the latter is underpinned by the markets’ new focus on Syria. Western governments accuse President Assad of a deadly chemical attack on a rebel-held suburb of Damascus.

There’s not a lot still to come on Monday in terms of scheduled economic news. Of what there is only Canadian housing stars are likely to merit much investor attention.