The Australian Dollar initially welcomed a larger-than-expected trade surplus in February as AUD/USD pushed higher in recent days. Australia’s net exports amounted to A$825m versus A$725m expected which was lower than the A$952m surplus in January.

Both exports and imports were little changed from the prior month. Since the former was still larger than the latter, the end result was a positive outcome. This in turn means that its contributions to GDP will be positive which bodes well for Australia’s economy. However, the Reserve Bank of Australia reiterated earlier this week that it is in no rush raise.

With that in mind, the currency soon gave up its gains on the data and resumed falling. Leading into the data release, Aussie Dollar was falling alongside local government bond yields as the US Dollar rose. Yesterday, the opposite behavior occurred. Perhaps the passing of mild event risk allowed traders to resume their appetite for the greenback, which is another increasingly attractive higher-yielding alternative.

A lack of critical local event risk on the docket will probably have the Australian Dollar focusing its attention to external factors. This has been the case for the past few days. Just this past session, the sentiment-linked currency rose as trade war fears ebbed and NAFTA talks continued on a more positive note. Later this session, we will get the US trade deficit which has come under scrutiny by President Donald Trump. 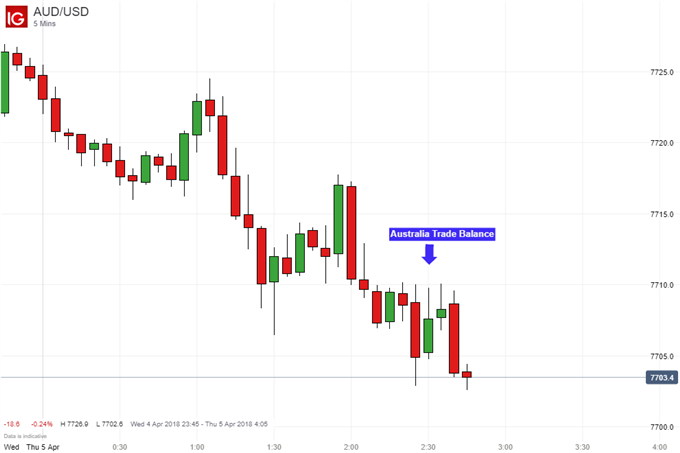 On a daily chart, AUD/USD has put in a move higher after the RBA rate decision as expected. However, it is still below the 61.8% Fibonacci retracement at 0.7743 which stands in the way as immediate resistance. A push above that exposes the upper line of the falling wedge bullish pattern.

For confirmation of a more lasting move, AUD/USD will have to break above the falling wedge and give confirmation. Such an outcome threatens the downside progress it has made since early February.

On the other hand, if prices turn back lower, near-term support is the 76.4% level at 0.7651. The pair has struggled to push below this area recently and we will see if it manages to do so. The next target would be the long-term rising trend line from January 2016. 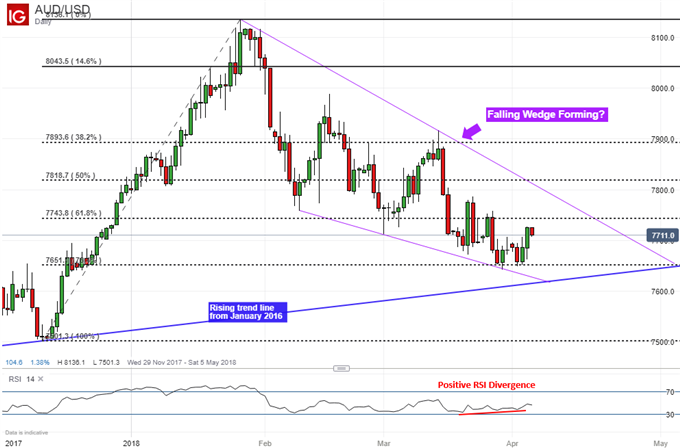