The Australian Dollar was steady after April’s RBA rate decision, however AUD/USD may be heading for a reversal in the near-term. As widely expected, the central bank left rates unchanged at 1.50 percent which marks the longest streak of unadjusted policy in the country’s history. Here is what it had to say.

The Reserve Bank of Australia continues to reiterate that an unchanged policy is consistent with meeting the CPI target and sustainable economic growth over time. In addition, Governor Philip Lowe repeated that inflation is likely to remain low for some time. Finally, the bank’s forecast for 2018 still calls for faster economic growth.

All in all, the RBA once again showed us that it is in absolute no rush to raise rates at the moment. Before the announcement, overnight index swaps were pricing in a 32.3% chance that one hike could be upon us by the end of the year. This is slowly but surely looking increasingly unlikely. With the status quo update now behind us, the Australian Dollar can now focus on upcoming domestic event risk and ever-present external ones.

Keep an eye out for this week’s local trade balance data. There, the surplus is expected to decrease to A$725m from A$1055m. Data out of the country has tended to underperform relative to expectations since mid-January. A downside surprise could hurt the Australian Dollar as it could open the door to a softer GDP outcome in the future. 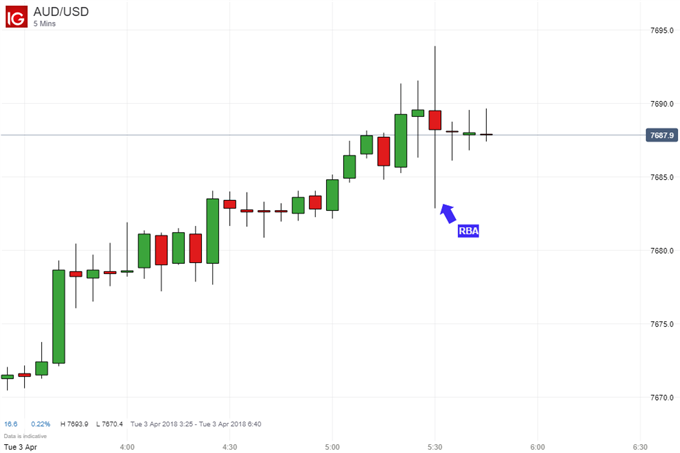 On a daily chart, AUD/USD has been struggling to push below 0.7651 which is the 76.4% Fibonacci retracement level. Interestingly, positive RSI divergence has emerged and it shows ebbing momentum to the downside. This could mean that prices may reverse in the future but confirmation will be needed.

If AUD/USD does end up turning higher, near-term resistance is the 61.8% level at 0.7743. A push above that exposes the resistance line of the falling wedge bullish pattern. If a breakout does occur, this could mean that the pair may keep climbing in a more substantial move.

On the other hand, prices may keep falling to near-term support which is the lower line of the wedge. Immediately following that is the long-term rising trend line that dates back to January 2016. A push below that exposes the December 10th low at 0.7501. 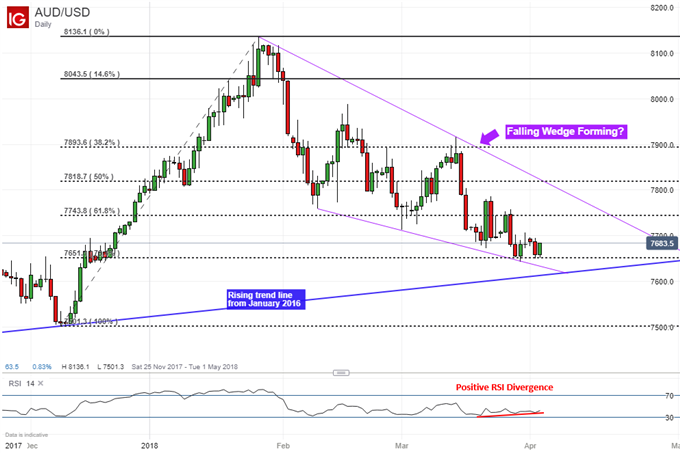