Asian Stocks Down Once More On US Tech Woes, Trade Worries

The woes of US technology giants spilled over to Asian stock markets once again on Tuesday, which is hardly surprising given that so many of their suppliers are in the region.

Facebook, Alphabet Netflix and Google all declined on Wall Street, having begun their selloff last month. Amazon was also under pressure following Tweeted criticism from US President Donald Trump. In a session of scant local economic news, Asian shares followed them lower.

The Nikkei was down 0.45%, with the ASX 200 down 0.2% and all other bourses in the red as their closes loomed, including both Hong Kong and mainland China. Australia’s benchmark index is still flirting with its lows for the year, but strong support from the mid-part of last year seems to be halting its decline for the moment. 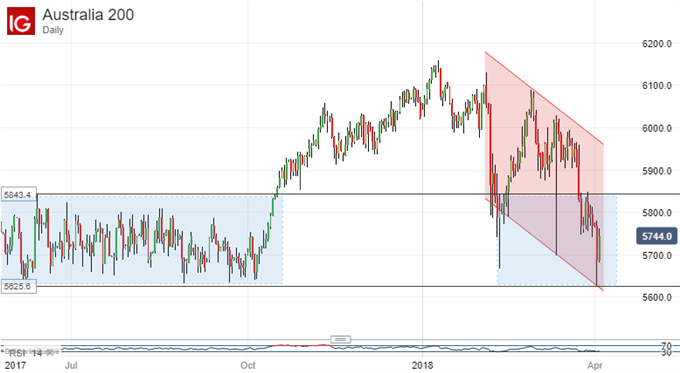 Turning to foreign exchange, the Japanese Yen held up against the US Dollar as risk averse investors once again preferred perceived haven assets. The Australian Dollar was unmoved by the well-flagged Reserve Bank of Australia decision to hold interest rates at their record lows for a further month. Once again the RBA seemed in no hurry to move and investors are now keen to see whether it will stick to its relatively optimistic growth forecasts when these are revised next month.

There was some better economic news out of Australia earlier, however, when its manufacturing sector Purchasing Managers Index form the Australian Industry Group hit 63.1- its best ever level. This also means the index has remained in expansion territory for eighteen straight months, the longest unbroken run for thirteen years

There’s not a huge amount remaining on the economic data schedule Tuesday. Investors will get a look at the UK’s manufacturing PMI for March, while Minneapolis Federal Reserve President Neel Kashkari will speak at a regional forum. The data do start to get a bit more serious as the week goes on however, with US non-farm payroll data coming up on Friday.