USD/JPY Ready to Climb After Jobs and Industrial Production Data?

The Japanese Yen didn’t pay much attention to another relatively solid local jobs report, but USD/JPY may be on the verge of a reversal. In February, Japan’s jobless rate rose to 2.5% from 2.4%. However, that was lower than the 2.6% expected outcome. Meanwhile the labor force participation rate increased to 60.8% from 60.5% which is the highest since last October. The only disappointment was that the job-to-applicant ratio fell to 1.58 from 1.59.

Just 20 minutes later, worse-than-expected industrial production also crossed the wires. There, output declined to 1.4% y/y versus 2.3% expected for the February preliminary estimate. That was the weakest outcome since October 2016. The m/m reading also fell short at 4.1% versus 5.0% estimated. On this data, the Yen had a more substantial negative reaction. However, its movement was less than 0.1%.

In general, the Japanese Yen typically rarely produces a significant reaction to local economic data. This is because the Bank of Japan is amidst an easing programme which is meant to bolster inflation. Just the other day, Governor Haruhiko Kuroda mentioned that the central bank will continue powerful monetary easing persistently. He added that he wants inflation amid a virtuous economic cycle.

With that in mind, the anti-risk currency will probably continue paying attention to sentiment as it has been this week so far. Although yesterday the Yen rallied as yields fell at a local 2-year government bond auction. Be mindful of the incoming Good Friday holiday which may produce illiquid trading conditions. Stock markets will be closed in countries such as Australia, Canada, New Zealand, UK and the US. 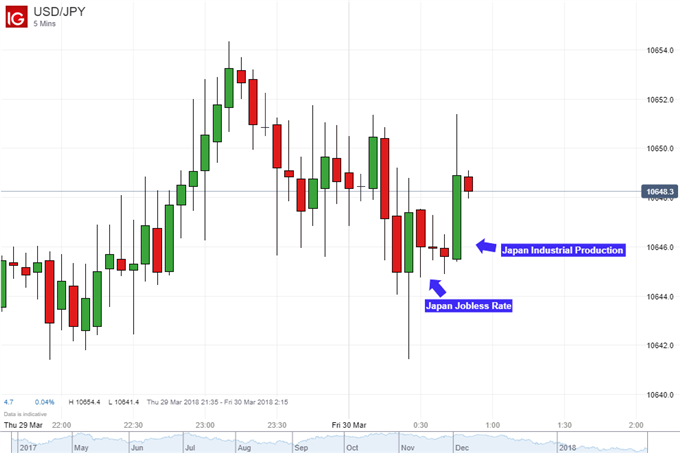 On a daily chart, USD/JPY seems to be taking a break under key near-term resistance levels after putting in a push higher since the beginning of this week. The pair did form a morning star bullish reversal pattern as well and it was followed by confirmation via the Wednesday candle. Simultaneously, positive RSI divergence hinted that downside momentum was decreasing.

From here, USD/JPY will have to push above the January descending trend line and horizontal resistance at 106.98. A push above that exposes the March 13th high at 107.29. Should the pair keep climbing, it will then face the 38.2% Fibonacci retracement at 108.49. 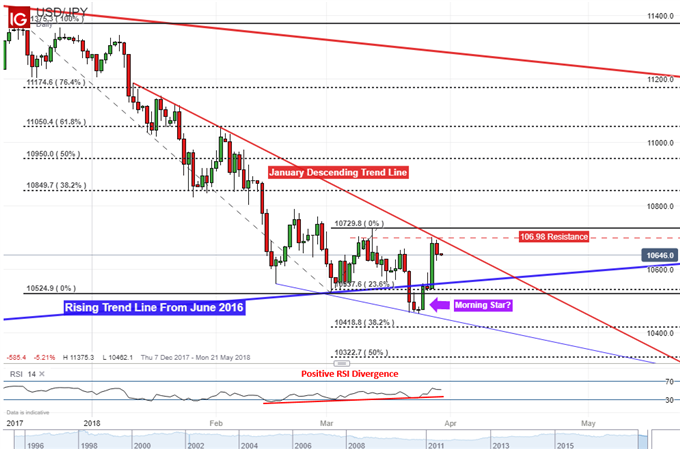