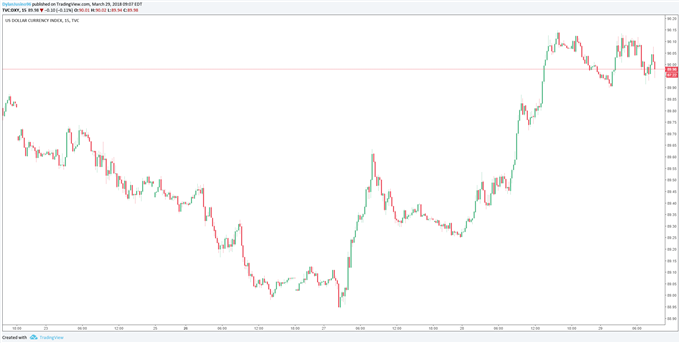 Inflation Ran Under 2% in February While DXY Holds Steady

- The Personal Consumption Expenditure came in line in February; notably, Core PCErose by 0.1% YoY over the previous month

Today marks the last trading day of the month and quarter for US markets. Despite this today has been a busy eventful trading day with economic data prints out of the Eurozone, UK, and of course US. In February, ticked up by a subtle 10 basis points from the month prior. Last month, the Personal Consumption Expenditure (PCE) index came in at 1.7% as expected. Real PCE, also referred to as core PCE, moved up by less than 0.1%. The 1.6% core figure equated to a $1.4 billion increase in consumption. $1.0 billion was attributed spending for goods and $0.4 billion was spent in services.

Personal income (table 6) rose by a meager 0.4% last month which matched estimates and the figure in January. This equated to $67.3 billion according to the Bureau of Economic Analysis (BEA). Disposable personal income (DPI) rose by $53.9 billion, also 0.4%, and personal consumption expenditures (PCE) increased $27.7 billion, 0.2% month-over-month.

In recent commentary by Federal Reserve Officials, the central bank overall has an optimistic view on the inflation trajectory in the near term. Officials are confident that inflation will move up to the 2% goal. Although, that goal was clearly not met in February and but did tick up slightly over previous month. Now more than ever, inflation is one of the biggest drivers of their monetary policy decisions. In addition, PCE is the Fed’s preferred inflation gauge. If the trend continues officials may find it increasingly difficult to substantiate a rate hike at the coming FOMC meetings.

As global trade tensions have receded throughout the week DXY climbed back up the 90 level. We can see that today’s inflation data did very little to convince traders to take either side on the dollar. At the time that this was written DXY traded around 89.97.