- The safe-haven JPY is losing its attraction as US/China trade concerns ease and a visit by North Korea’s leader to China lessens tensions in the region.

- That should help USDJPY, which is showing signs of stabilizing after its recent heavy losses.

USDJPY is edging higher after its sharp losses so far this year as an easing of US/China trade tensions and a visit by North Korean leader Kim Jong Un to China lessen the attractions of the Japanese Yen, which is regarded as a safe haven in times of geopolitical upheaval. Moreover, the pair could rise further if it can break through trendline resistance on the charts.

Havens like the Yen have been in demand as traders reduce their exposure to riskier assets. However, that demand seems to be tailing off as hopes rise that the US and China will avoid a trade war and that Kim’s visit to China will lead to talks with US officials and begin the process of ending North Korea’s isolation.

From a technical standpoint, USDJPY will need to break through resistance from a trendline joining the falling highs recorded in February and March if it is to make further progress. That is currently just above the 106 level and if the pair manages to climb above it the next target will be the 50-day moving average just under 107.

To the downside, support lies at the trendline joining the February and March lows, now at 104.40.

Sentiment data positive for USDJPY too

At DailyFX, we typically take a contrarian view to crowd sentiment, and the fact traders are net-long suggests USDJPY may continue to fall. Yet traders are less net-long than yesterday and compared with last week. Recent changes in sentiment point to the current USDJPY price trend soon reversing higher despite the fact traders remain net-long. 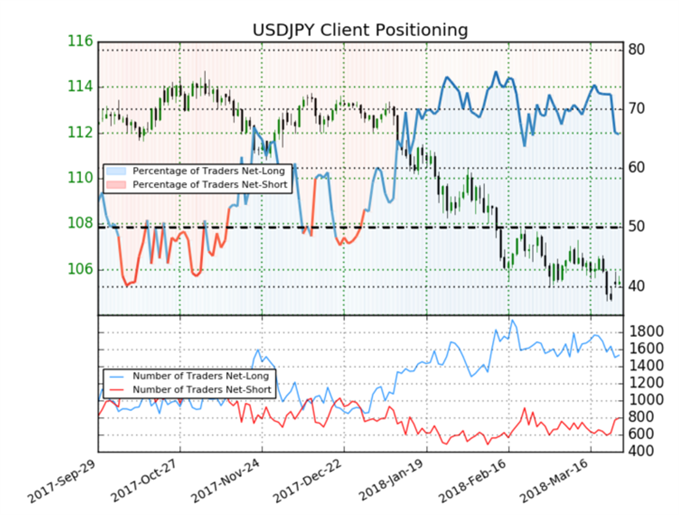 Whether you are a new or an experienced trader, at DailyFX we have many resources to help you: analytical and educational webinars hosted several times per day, trading guides to help you improve your trading performance, and one specifically for those who are new to forex.