National Security Advisor H. R. McMaster has been the subject of departure rumours since last week. President Trump proved them true by Tweeting news of his leaving as Asia Pacific trade got going Friday. Market mood was not helped by news that McMaster's replacement will be the more hawkish former United Nations ambassador John Bolton.

This darkened a mood already overshadowed by weakness in European and US stocks in the previous session. Trump had already signed a memorandum to impose tariffs on up to $60 billion in imports from China and on Friday Beijing hit back with a list of 128 US products which could be potential targets for retaliatory trade barriers.

Given all that, equity weakness should hardly surprise, even if the scale of it is something new this year. The Nikkei 225 slid 4.5% with the ASX 200 off 3%. The Australian benchmark plumbed February’s depths, with the lows of November, 2017 uncomfortably close should they give way conclusively. 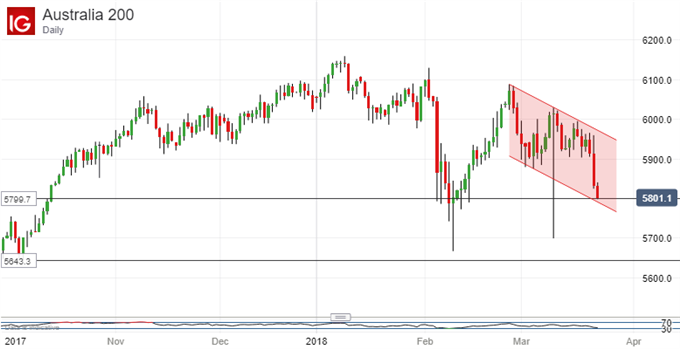 Chinese stocks also registered heavy falls as their day’s close approached and Seoul’s Kospi was off 3%.

The US Dollar took a hammering against the Japanese Yen with perceived haven assets clearly in vogue. Growth- and trade-linked currencies such as the Australian Dollar also took the day’s news hard.Elsewhere Japanese inflation printed a fresh three-year high, doubtless to the pleasure of the Bank of Japan which has for so long been trying to stimulate it. However, the Yen was already elevated and the data didn’t lift it much higher.

Gold prices got a predictable boost from raised risk aversion, while crude oil prices continued higher on Saudi comments suggesting that production cuts could last into next year.

Still to come Friday are Canadian retail sales and consumer price data, along with US durable goods orders and new home sales