An already elevated Japanese Yen didn’t rise much further Friday despite news of a three-year peak for domestic inflation.

The official Consumer Price Index rise came in at 1.5%- its strongest showing since March, 2017. It edged past January’s 1.4% gain too. The ‘core’ measure which strips out the volatile effects of food prices rose 1% and the rate without both food and energy came in at 0.5%.

CPI is clearly heading in the direction which the Bank of Japan would like, after years of extreme stimulus directed to this end. However, it remains well short of the official 2% target rate, and the BoJ has said that that would need to be reached sustainable before stimulus can be withdrawn.

There has been some Yen-strengthening speculation that withdrawal could come sooner than that, however and, despite the BoJ’s repeated and vociferous denials, strong inflation data such as these are only likely to magnify it.

However, the Japanese Yen failed to move much after the numbers. Despite CPI’s strength all readings were as expected and USD/JPY had already fallen to four-month lows overnight on general Dollar weakness so the Yen probably never had much more to give. 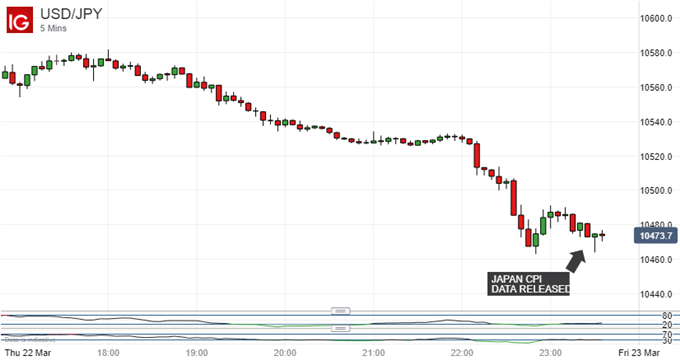 On its daily chart USD/JPY is now back very close to the downtrend channel which has dominated trade for most of this year. It had broken out of it a couple of weeks ago, and range traded since. However, Thursday’s US session brought a sharp general US Dollar drop as investors worried that the Administration’s tariffs could ignite a trade war, throwing optimistic global growth assumptions into doubt. The greenback suffered its worst one-day fall for more than two months, with the perceived-haven Yen a notable beneficiary. 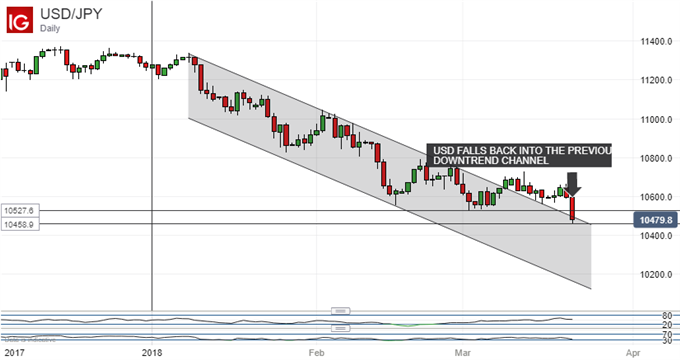 It’s too early to say whether these Dollar falls are going to stick, but a daily or weekly close back in that downtrend channel could be significantly bearish.