The anti-risk Japanese Yen and Swiss Franc were the best performing majors on Thursday amidst a broad selloff on Wall Street during the latter half of the day. Most of the concerns were driven by developments out of the white house, of which there were many.

First Donald Trump’s lead lawyer in the special counsel investigation, John Dowd, resigned. According to newswires, it was reported that the president was ignoring his advice. Next, Mr. Trump signed off on $50 billion in tariffs aimed at China over intellectual property theft.

Finally, news that the House passed a $1.3 trillion spending bill did not do much to calm the markets. A shutdown deadline looms on Friday and the bill moves on to the Senate. That gives them around 24 hours to avoid a shutdown.

Sentiment-linked currencies underperformed, especially the Australian Dollar. It was hurt earlier in the day by a worse-than-expected local jobs report. Meanwhile the US Dollar appreciated, likely benefiting from its status as a safe-haven as the world’s most liquid currency. Though it declined earlier during the Asian session in the aftermath of a less hawkish FOMC monetary policy announcement.

The British Pound briefly rallied earlier in the day when the Bank of England left rates unchanged. However, the vote to hold rates was not unanimous.

Just as Friday’s session got started and less than eight hours after John David’s resignation, National Security Adviser H.R. McMaster said that he will resign. His replacement will be John Bolton. The Japanese Yen was quick to rally amidst this news. USD/JPY was already down more than 0.5% ahead of the Tokyo Stock Exchange open. 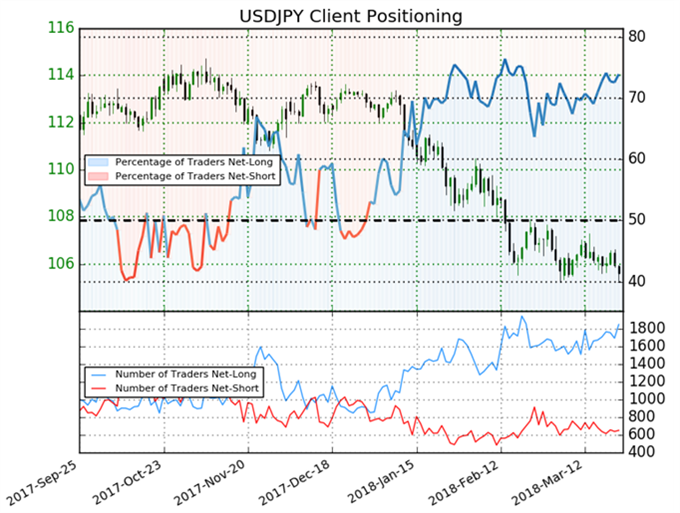 Retail trader data shows 73.9% of USD/JPY traders are net-long with the ratio of traders long to short at 2.83 to 1. In fact, traders have remained net-long since Dec 29 when USD/JPY traded near 112.39; price has moved 6.1% lower since then. The number of traders net-long is 5.3% higher than yesterday and 5.0% higher from last week, while the number of traders net-short is 1.2% lower than yesterday and 14.4% lower from last week.