Just started trading NZD/USD and would like to incorporate this into your own trading strategy? Check out our beginners’ FX markets guide!

The New Zealand Dollar held its ground against its US counterpart even though the RBNZ left rates unchanged and pretty much signaled that a rate hike by the end of the year is unlikely. Heading into the announcement, the markets were widely expecting the central bank to leave its benchmark lending rate at 1.75%. However, what they were anticipating is policymakers’ forward guidance.

Comparing to the previous statement, the Reserve Bank of New Zealand once again reiterated that monetary policy “will remain accommodative for a considerable period…numerous uncertainties remain”. What was new is that they expect inflation to weaken in the near-term while picking up over the medium-term. The central bank acknowledged the weaker fourth quarter GDP outcome, but also noted that growth is expected to strengthen.

It should also be noted that this was the last rate announcement before Adrian Orr becomes the RBNZ’s new governor. It is also ahead of it taking on a new mandate which will add targeting full employment in addition to stabilizing prices. The softer outlook on inflation in the near-term plus the incoming regime change probably hints that a rate hike by the end of the year is unlikely.

Indeed, local front-end government bond yields fell as the monetary policy decision crossed the wires. This signaled ebbing hawkish bets. Yet, the New Zealand Dollar stood its ground. This could have been due to the markets still digesting the FOMC rate decision and Powell’s news conference. There, the markets sold the US Dollar likely due to the outlook for rate hikes being unchanged in the near-term. 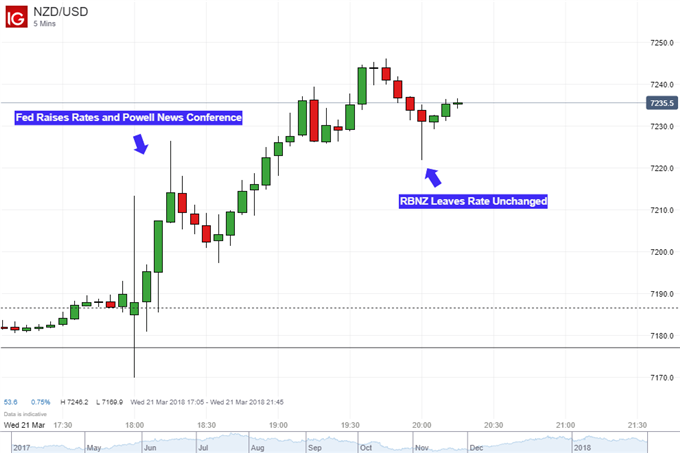 On a daily chart, NZD/USD has been making progress to the downside as expected since forming a dark cloud cover bearish reversal technical pattern. Since then, the pair was unable to close below the February 8th low around 0.7176 and appears to be confined in a near-term descending channel.

From here, the upper line of the channel stands in the way as immediate resistance. A push above that exposes the 23.6% Fibonacci retracement at 0.7282. On the other hand, if prices turn lower Kiwi Dollar will face a long-term trend line that dates back to September 2015. In the past, this line has acted as both support and resistance. A break below the line places the 50% midpoint of the retracement as the next target at 0.7109. 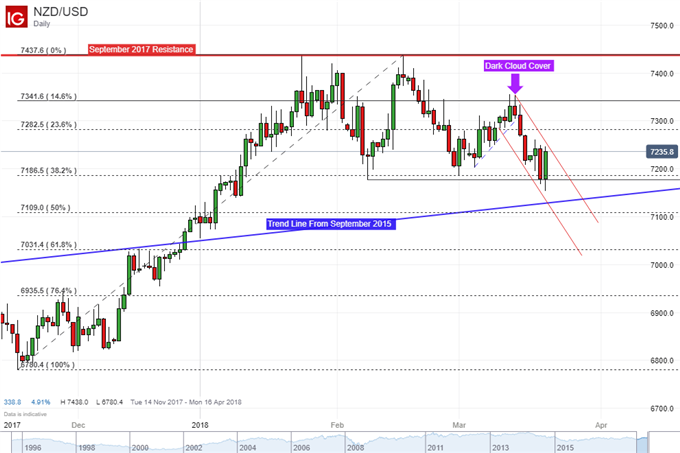