Asian Stocks Recover Losses After US Session Jitters, SNB Due

Most Asian stocks began Thursday’s session with declines, reacting to developments that unnerved the markets during the US session. There, Germany’s Chancellor Angela Merkel opened the door to potential US tariff relation if Europe cannot get exemptions. Earlier in the week, President Donald Trump threatened to tax cars imported from the EU.

Some of those fears eventually cooled and by midday, indexes such as the Nikkei 225, Shanghai Composite, and Kospi were at breakeven. Australia’s ASX 200 on the other hand was still in the red at that point. Losses there were amplified earlier in the day when local consumer inflation expectations rose to 3.7% in March from 3.6% in February.

On the currency side of things, the New Zealand Dollar was one of the worst performing majors. It was negatively impacted by a worse-than-expected local GDP report which cooled RBNZ hawkish monetary policy bets. The Japanese Yen was higher as sentiment improved towards the latter half of the Asia trading session.

Looking ahead, March’s Swiss National Bank rate decision stands as one of the top tier event risk for the day. As Senior Currency Strategist Christopher Vecchio mentioned, the SNB has mirrored the ECB since the Global Financial Crisis, and we will be looking for any subtle shifts in stance. 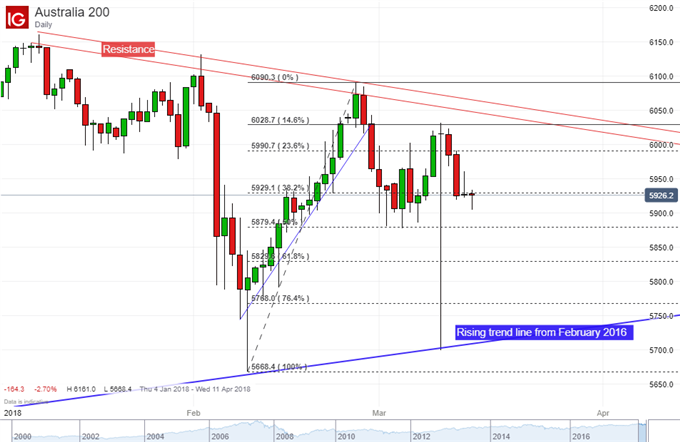 The ASX 200 appears to be trying to resume a move to the downside in the aftermath of breaking below near-term rising support which is the thinner blue line on the chart above. However, it is stuck right on the 38.2% Fibonacci retracement level at 5,929. Near-term resistance appears to be the 23.6% level at 5,990 while support at 5,879.