Join a Trading Q&A webinar and ask about how you can apply this NZD/USD chart setup in your own strategy!

The New Zealand Dollar depreciated against its major counterparts after a worse-than-expected local GDP report crossed the wires. In the fourth quarter of 2017, New Zealand’s economy grew 2.9% y/y versus 3.1% expected and 2.7% in the third quarter. The quarter-on-quarter outcome was 0.6% versus 0.8% estimated.

Looking at the details of the release, one of the largest factors that contributed to the softer outcome here was a decline in the agricultural/forestry/fishing sector. This is one of New Zealand’s primary industries and this sector contracted 3.2% q/q. Mining was also at +1.8% q/q versus +3.2% prior.

As the data crossed the wires, front-end New Zealand government bond yields fell. This signaled ebbing hawkish RBNZ monetary policy bets. At this point, overnight index swaps are pricing in a 41.8% chance that a rate hike could be upon us by the end of the year. 2019 now seems like the more probable time for this.

Perhaps rightfully so, the central bank expects growth to pick up over the medium-term. However, their near-term outlook is much softer. We will see what the Reserve Bank of New Zealand might say about the data next week at their March monetary policy announcement. 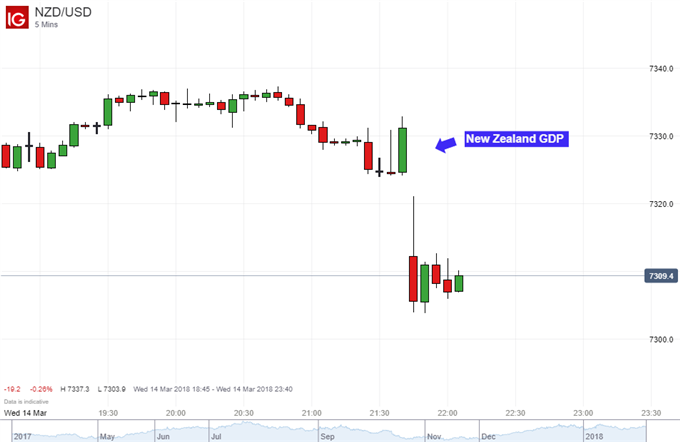 On a daily chart, NZD/USD appears to be stuck under the 23.6% Fibonacci extension which is around 0.7341. The pair has been trending higher since the beginning of March but this level has thus far proven to be difficult to push above. After the GDP release, the pair fell but has yet to touch the 14.6% minor level at 0.7282 and we will see if this ends up being support over the next 24 hours.

Should Kiwi Dollar continue pushing higher, it will eventually face the 38.2% Fibonacci extension at 0.7437. Coincidentally, this area also aligns with the September 2017 horizontal resistance line. What this translates to is a potentially stubborn level to push through.

In that instance, NZD/USD could form a triple top bearish reversal pattern which could make for an interesting trading setup. Still, the pair could also turn around and start falling back. In that case, it will face the aforementioned support levels and eventually the March 1st and February 8th lows. 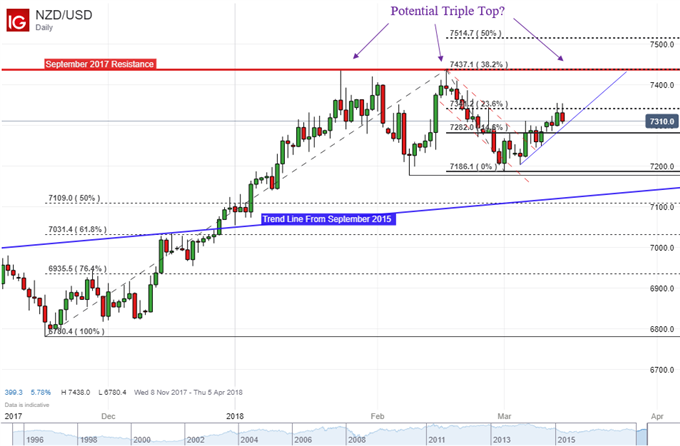