USD/CAD, USD/MXN Drop as Trump Backs Off Hardline on Tariffs

- The Trump administration has rolled out its plan to enact aluminum and steel tariffs, at the 10% and 25% threshold as rumored, respectively.

- The Mexican Peso was the top performer after news of the announcement emerged, with the Canadian Dollar likewise clawing back its losses on the day.

- Sentiment for the US Dollar is mixed after an active day on Thursday between the Trump announcement and the European Central Bank rate decision.

Speculation over a global trade war hit a fever pitch this week, culminating in US President Trump’s announcement today that the United States would be imposing aluminum and steel tariffs, at the 10% and 25% threshold as rumored, respectively. However, with a pathway cleared for the United States’ key trading partners – Canada and Mexico – to be exempt from the steep tariffs, both the Canadian Dollar and the Mexican Peso outperformed the rest of the G10 currencies in the US afternoon session.

In fact, given the underperformance of USD/CAD and USD/MXN relative to the broader DXY Index, it is evident that traders feel there may be a practical way for both countries to avoid a protracted trade disagreement with the United States, thereby avoiding what could be the beginning of a global trade war. At stake, of course, is the future of NAFTA. 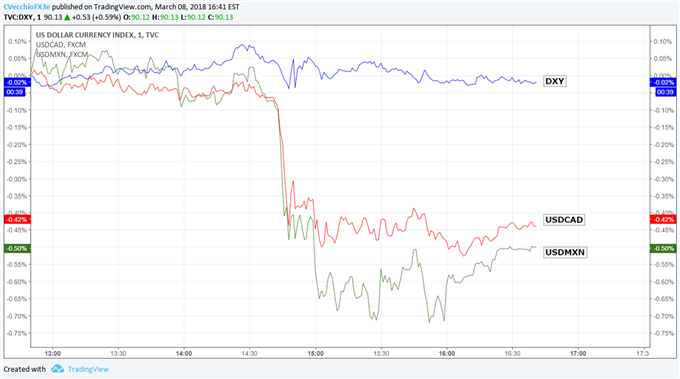 It remains to be seen how beneficial the outcome of the NAFTA negotiations will be to the three countries involved. Since the negotiations spilled into the public forum back in the beginning of February, both the Loonie and the Peso have underperformed relative to other currencies in the G10 space versus the US Dollar.

The brief pause in tension today – and the exemption from the aluminum and steel tariffs – seems to be predicated on the notion that a NAFTA will be renegotiated in a manner more beneficial to the United States. Should no deal be reached, US President Trump said that “we’re going to terminate NAFTA and we’ll start all over again or we’ll just do it in a different way.”

By no means does this mean that either the Canadian Dollar or the Mexican Peso is out of the woods yet. In what appears to be a move to maximize leverage in the NAFTA renegotiations, there is still the looming threat of the steep tariffs to come into effect if the situation sours once more.

It’s likewise worth noting that there are approximately ~148K steel producing jobs in the US while there are ~6.5M steel consuming jobs. A 25% steel tariff, for example, might hurt the US more than it will help – in the form of lost jobs, lost wages, and a higher cost of goods for all consumers in the United States.

Read more: The Impact of Tariffs and Trade Wars on the US Economy and the Dollar