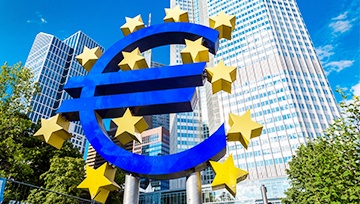 - The ECB kept all its monetary policy settings unchanged Thursday, as widely expected.

- However, the Euro jumped as the central bank decided to remove its bias towards easier policy.

The European Central Bank kept all its monetary policy settings unchanged Thursday, as expected, but decided to remove its bias towards easier policy. Before the meeting, analysts were split down the middle over whether the ECB would remove it or keep it.

The key section in the forward guidance provided by the Euro-Zone central bank’s Governing Council was: “the GC stands ready to increase the APP in terms of size and/ or duration,” where the APP is its asset-purchase program designed to inject money into the region’s economy.

Removing that strengthened EURUSD, which yesterday reached its highest level since February 16.

The ECB’s €30 billion per month bond-buying program is due to expire in September and in the coming months the bank is expected to discuss and then announce a further tweaking of its communication stance, offering forward guidance on when and how the markets can expect the program to be ended, probably late this year. This tweak could come as soon as next month.

Dropping the easing bias from its statement provides further support for the Euro, which has firmed against the US Dollar in recent days on fears of a trade war.

While a tapering of the bond-buying program to zero is likely by the end of this year, the ECB has said already that Euro-Zone interest rates will not be increased until well past the horizon of its asset purchases, and it could wait until the middle of next year to raise them.

Low Euro-Zone inflation, a firm Euro and the possibility of a trade war with the US all suggest that the ECB will withdraw its monetary stimulus only cautiously, but hawks on the General Council are already pointing to solid economic growth and falling unemployment as reasons to act sooner rather than later.

If the hawks win the argument, EURUSD could move up quickly to the psychologically-important 1.25 level, although General Council members are likely to try to talk down the Euro to boost inflation, which at 1.2% is at its lowest since December 2016 and well under the ECB’s target of below but close to 2%.

Help to trade the forex markets

Whether you are a new or an experienced trader, we have many resources available to help you: IG client sentiment data, analytical and educational webinars hosted several times per day, trading guides to help you improve your trading performance, and one specifically for those who are new to forex.