An Australian Dollar already buoyed by news of a stronger than expected domestic trade surplus rose only slightly when it was revealed that China had chalked up the same.

China’s US Dollar-terms trade balance for February was $33.74 billion, hugely above the expected $5.7 billion deficit. Behind the headline exports rose by an astonishing 44.7% on the year while imports grew by a weaker than expected 6.3%. Almost needless to say, these numbers are skewed to some extent by distortions arising from the long Lunar New Year break.

They also came after official Australian trade data which likewise saw a strong move into surplus when deficit had been expected. In Yuan terms the surplus was 224.9 billion, against an expected deficit of 68.9 billion.

However, the Australian Dollar’s lack of response could also be in some measure due to current concerns over the possibility of tariffs on imported steel and aluminum in the US. This prospect has already caused the resignation of a key White House economic aide in Gary Cohn, and can only stoke fears of rising tit-for-tat protectionism around the globe.

With so much concern about future trade, past trade figures may simply now be too historic to move markets as it might have.

On its daily chart AUD/USD is flirting with the upper boundary of a downtrend channel which has been in place since late January, charting the Aussie’s retreat from three-year highs. Recent pep has come on the back of general US Dollar weakness, exacerbated by that shock resignation.

However, this strength could be fleeting. After all, increased protectionism is unlikely to benefit Australia’s vast raw material export machine. Moreover, the Reserve Bank of Australia did not sound like a central bank in any hurry to raise interest rates this week. It kept them at record lows for a nineteenth straight month and gave no hint that market expectations of a first rise well into 2019 might be misplaced. 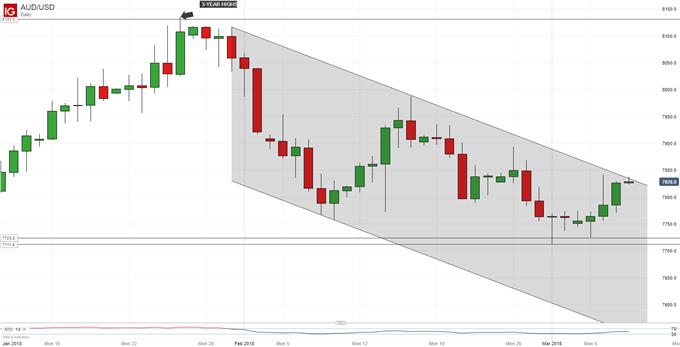 Still, a daily or weekly close above this downtrend line would count as an impressive victory for Aussie bulls who will then need to consolidate their win before attempting an upward push.

A deep, deep dive into what exactly makes some stand out from the crowd.

Find out where IG’s enormous client base is positioned in real time, across all the majors.