Have any questions on how the Australian Dollar behaved on the data? Join a DailyFX Trading Q&A Webinarand ask it live!

The Australian Dollar had a hard time making up its mind up on what to think of a local GDP release, probably because of distractions on prior developments. Just as Wednesday’s session got started, Donald Trump’s top economic advisor Gary Cohn resigned and sparked market turmoil. Leading into the data release, S&P 500 futures were down along with the sentiment-sensitive Aussie Dollar.

Australian front-end government bond yields were already tumbling heading into the GDP release, signaling ebbing RBA rate hike expectations. However, there wasn’t much of a reaction to the data on that end either. Perhaps the markets had exhausted most of their momentum on the trade developments and the worse-than-expected growth numbers failed to add fuel to the fire. 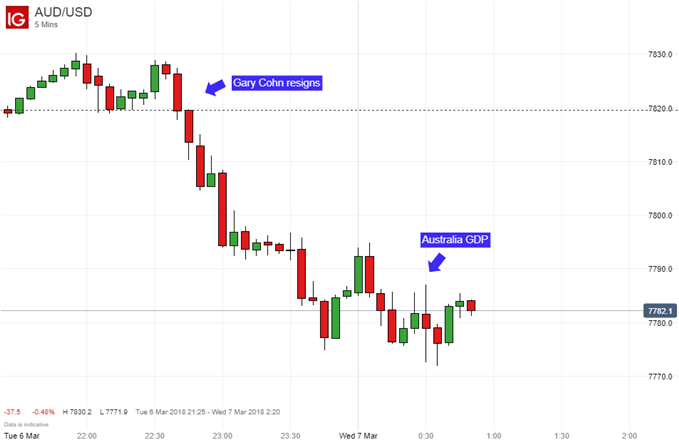 Due to the recent trade developments which hurt AUD/USD, the descending triangle formation continues to be in play on the daily chart. Not only did the pair fail to close above the “upper descending trend line”, but the “lower horizontal line” at 0.7788 proved to be too much yet again. AUD/USD has now been in limbo below this area since the first day of March.

On the other hand, the aforementioned lines of the descending triangle stand in the way as immediate resistance. A break above the pattern would expose the 38.2% Fibonacci retracement at 0.7893. 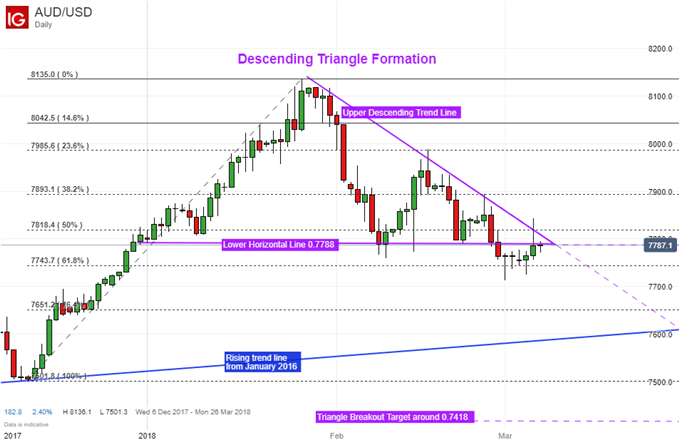