The Australian Dollar rose a little Thursday following the release of data which showed China’s private manufacturing sector expanding more strongly than had been expected.

The Caixin Purchasing Managers Index for February came in at 51.6 when the market had been looking for a gain of 51.3. In the logic of PMI surveys, any reading above 50 signifies an expansion for the sector in question. Survey compilers CEBM said that the Chinese economy remained durable but that the sustainability of demand from this month on will be key in determining the year’s course.

This Caixin focuses on privately-held concerns which tend to be smaller than the large, often state-run entities measured by the official PMI. That was released on Wednesday and came in at its weakest since July, 2016, although the long Chinese Lunar New Year holiday may have taken a toll.

AUD/USD got a very modest lift on the news, which must have been welcome for Aussie bulls given the hit they took earlier Thursday on news of the weakest domestic capital spending since late 2016. 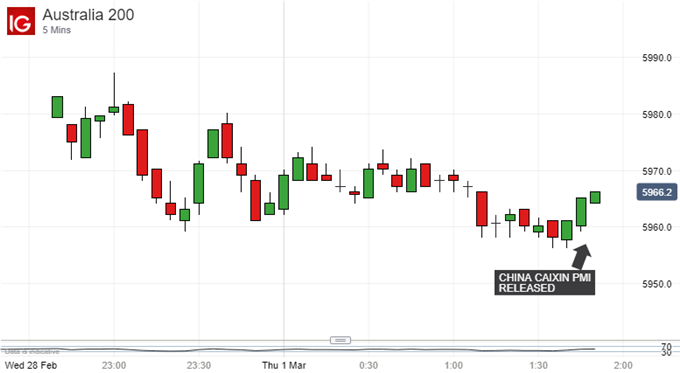 On its daily chart, the Australian Dollar remains in the broad downtrend against its US cousin which has been in place since AUD/USD topped out at three-year highs on January 26. Within that downtrend the most recent foray higher seems to have failed and focus now is on the lows of early February in the 0.7784 area, not far from current levels. If they give way then another leg down is probably in the offing, with 0.7601 as clear channel support, admittedly some way off.