New to financial market trading? Check out the DailyFX Beginners’ Guide. It’s free and all yours.

The Japanese Yen’s ascent against the US Dollar has certainly stalled, but greenback bulls still have reason to be uncomfortable.

USD/JPY bounced at 15-month lows earlier this month. At face value it appears to be building some sort of base, a hiatus in its long fall from the peaks of November, 2017 which in turn were the highest point for the pair since the previous March. 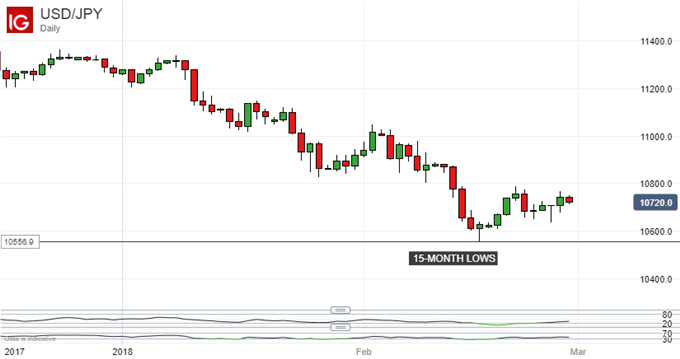 However, after nearly two weeks the Dollar’s bounce back has hardly been impressive. That’s quite a worry fundamentally speaking for its bulls given the clear, enduring divergence between monetary policy intentions between the Federal Reserve and the Bank of Japan. As far as anyone can tell the Fed remains very much on course to raise interest rates next month, part of a monetary tightening process likely to endure through this year and into next assuming the economy holds up. The Bank of Japan remains committed to ultra-loose monetary policy for the foreseeable future.

And yet this huge divergence still has yet to translate into meaningful US Dollar strength against the Japanese currency.

Indeed, there is a nascent formation on the USD/JPY daily chart which could suggest that another leg lower is coming. We can see the makings of a pennant pattern building. 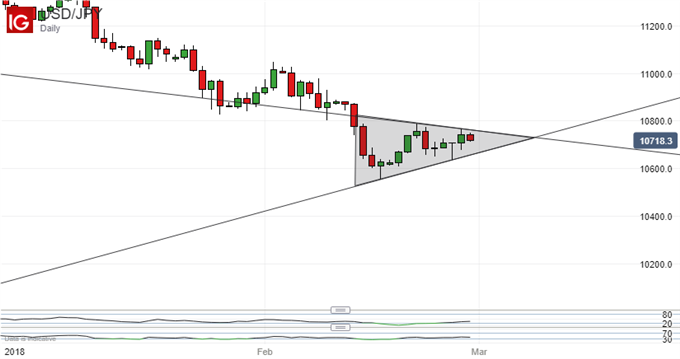 This combination of two respected trend lines is usually held to be a 'continuation pattern.' That means the trend in place before the pattern started to form will resume once it has resolved. If so it's bad news for USD/JPY bulls, putting another leg lower on the cards.

First support in that case is likely to come in around those 15-month lows. On the other hand, should the pattern prove false (and it’s not massively supported by many chart points just yet), then the mid-108 levels which failed to hold earlier this month will probably provide the first upside test.

The Euro is under similar pressure against the Japanese currency with the EUR/JPY downtrend in place since January 4 still dominant on its daily chart. Significantly the Euro is now flirting with levels which, if broken, would take it conclusively below a band of support and resistance which has held to the downside since mid-September last year.

Euro bulls’ urgent business would seem to be the avoidance of a conclusive break lower here, If they can’t then the region between current levels and June’s lows in the JPY128 area will be back in focus.