Here Are the Key Points From Fed Chairman Powell’s Testimony

- Federal Reserve Chairman makes his first appearance before congress commenting on the Fed’s balance sheet, the strength of the economy, but not a potential rate hike next month

- DXY breaks through 90.00 resistance level and holds onto gains

This morning has brought much volatility with a slew of economic data out of the U.S. Additionally, markets have been closely watching Federal Reserve Chairman Jerome Powell’s first appearance before congress. Prior the Chairman’s testimony he released his semiannual monetary report to congress. Here are his most noteworthy comments:

Following the Chairman’s statement he testimony before congress he made no comment on the Federal Open Market Committee’s (FOMC) upcoming March meeting. His words exactly, “I don’t want to prejudge the March FOMC projections” did not add nor take away from the liklihood of an interest rate hike next month. Powell defended the Fed’s post-crisis policies including the more recent decision to unwind the balance sheet. He also reiterated that the data since the FOMC’s December meeting suggests the economy is strengthening as fiscal policy becomes more stimulative. He outright rejected the idea of changing the Fed’s unwinding plan. The Chairman was also careful not to comment on fiscal policy’s and more specifically the impact of last year’s tax cuts on productivity and wage growth. Although, he suggested that, “corporate tax cuts in theory should boost investment and increased capital expenditure should lead to higher productivity” (and in turn higher wages). When asked about the national debt, Powell cautioned that “it is very important that the [US] government stays on a sustainable fiscal path” and that “the debt ceiling should always be raised in a timely fashion.” 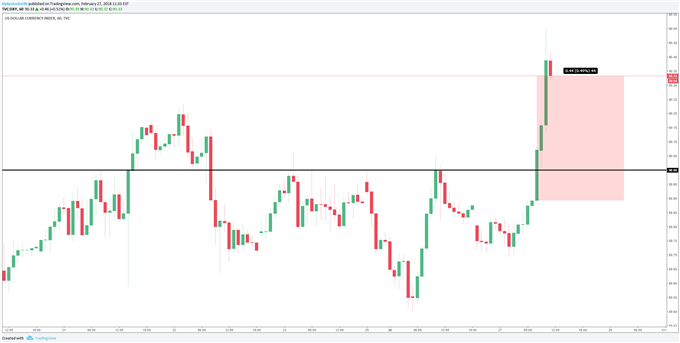 Leading up to Jerome Powell’s testimony, DXY had been on a clear uptrend as markets anticipated his comments. Prior to the release of the Fed Chairman’s statement, DXY broke through the recent 90.00 resistance level. And throughout Powell’s testimony the US Dollar Index managed to sustain that rally. At the time that this was written DXY traded at 90.33