The New Zealand Dollar fell across the board following a larger-than-expected trade deficit in January. New Zealand’s monthly trade balance was -NZD566m versus an expected equalize of NZD0m, this is also a contraction from December’s NZD596m surplus. The on-year deficit further increased to –NZD3218m from –NZD2879m prior, economists were calling for it to reduce slightly to -NZD2711m.

A trade balance is calculated by subtracting imports from exports and looking into the details of the release explains how the deficit ballooned. Imports were NZD4.87b, more than the NZD4.60b increase expected. All the while, exports only clocked in at NZD4.31b versus NZD4.58b expected.

Perhaps the weaker export results were as a consequence of reduced demand from some of New Zealand’s largest trading partners. On a month-to-month basis, exports to China, Australia, Japan and the US declined. Though the year-over-year readings were less damaging. Keep in mind, a trade deficit can negatively impact GDP because it is one of the four factors of calculating growth.

Even so, the Reserve Bank of New Zealand seems unlikely to change course on monetary policy in the near-term as a result of this data. The central bank has hinted that it is in no rush to adjust policy at its most recent rate decision. With that in mind, the sentiment-linked New Zealand Dollar will probably continue to be vulnerable to risk trends, external factors as well as ebbing yield appeal relative to its US counterpart. 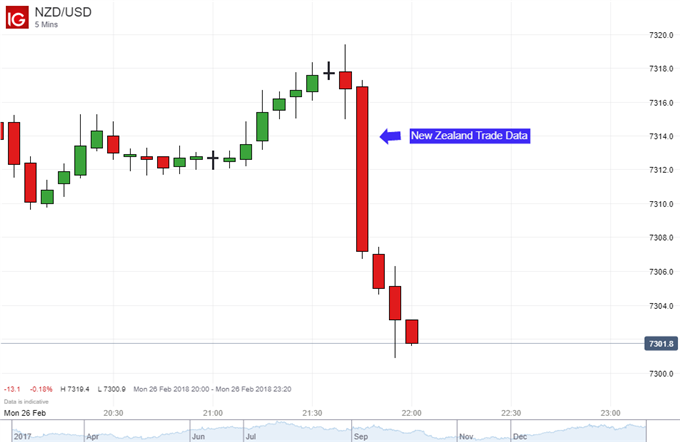 On a daily chart, NZD/USD appears to be making a move lower in a confined range since failing to push above horizontal resistance for a third time around 0.7437. As the pair moved higher to that area, negative RSI divergence occurred which indicated ebbing momentum to the upside. A double top has formed, but a lasting reversal still needs confirmation to argue that the pair is turning lower in a more pronounced move.

On the other hand, a turn higher would have to see NZD/USD breaking out of its current downward range. The 14.6% minor Fibonacci level at 0.7341 also stands in the way as immediate resistance. A push above that would expose the horizontal ceiling at 0.7437 which has at this point been tested three times. 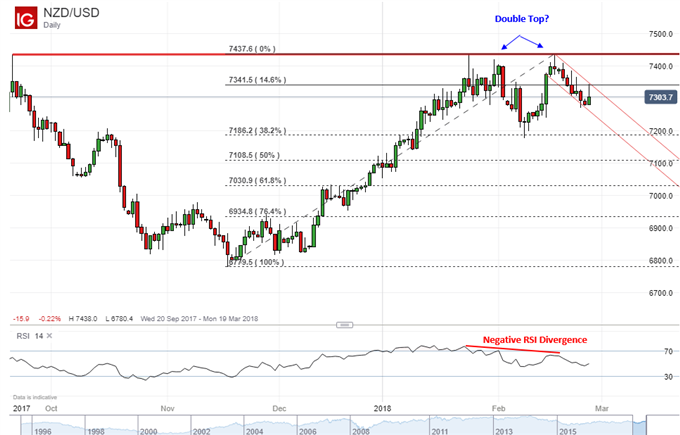