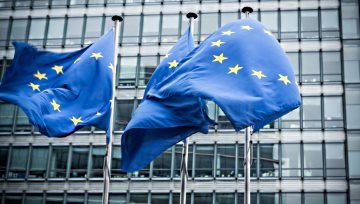 - The upcoming Italian election may cause the single currency to weaken further.

EURUSD Weakness to Continue as Inflation Refuses to Move Towards Target

The final release of January Euro-Zone inflation painted a familiar picture with little price pressure in the single-bloc evident, causing ECB President Mario Draghi an ongoing headache. The final Eurostat headline inflation for January of 1.3% was 0.1% lower than December and the lowest rate since mid-2017, while core inflation remained mired at 1.0%.The persistently low level of price pressure will stifle any hawkish ECB talk of tightening monetary policy. The ECB bond buying program (QE) is scheduled to finish in September this year and unless inflation turns higher an extension of the programme is very likely, although the purchase size – currently EUR30b a month – will likely be trimmed.

EURUSD currently trades around 1.23000 with February 9 low around 1.2200 the likely next downside target ahead of the gap created by the January 12 candle that needs to filled down to 1.20900, a level that currently coincides with the 100-day EMA.

DailyFX chief currency strategist John Kicklighter covered the ECB’s latest problems, including the recently voiced ‘currency war’ with the US in his latest webinar.

Italy will hold a general election on March 4 after the previous government was dissolved on December 28, 2017. With no outright winner expected, a coalition government is the most likely outcome which will take some time to form and create uncertainty in the Euro-Zone as all parties involved in the discussions battle to get their policies implemented. The latest polls show a center-right coalition ahead of any center-left coalition, a potential problem for the EU. In addition, German coalition talks are still ongoing, adding another level of uncertainty to the EU political back-drop.

What’s your opinion on EURUSD?Share your thoughts with us using the comments section at the end of the article or you can contact the author via email at nicholas.cawley@ig.com or via Twitter @nickcawley1.