FOMC Minutes Further Rate Speculation but Not the Dollar’s Gains

The minutes from the January 30th, 31st meeting of the Federal Open Market Committee, the last attended by Federal Reserve Head Janet Yellen, were released to relatively sedate market response. Since that last rate decision, broad equity price indexes have seen a large drop and a subsequent rebound with a spike in volatility, up from all time lows. This market activity would not find its way into the transcript due to timing in a meaningful way. That said, the new federal tax legislation passed did find its way into the assessment with ‘a number’ of Fed officials seeing an upside ‘risk’ to growth from the policy.

The January minutes further revealed that Federal Reserve officials grew more positive on the economic outlook and were increasingly optimistic on reaching their 2 percent inflation target. A number of participants revealed they have increased their forecasts for economic growth in the short-term compared to the forecasts they had in the December meeting. The minutes also said that “a majority of participants noted that a stronger outlook for economic growth raised the likelihood that further gradual policy firming would be appropriate.” “Further” was a qualifier discussed and added for this transcript. This adds to the strong market outlook for a rate hike in March of 2018 which stood at 77.5 percent according to Fed Fund futures and approximately 93 percent through swaps.

Looking to the market’s response following the release of the statement, both the Dollar and US equities offered limited engagement – though the currency initially slipped (and then recovered) and stocks advanced. Normally, this would be assessed as a sign that rate hike risks have faded, but that is not the case according the rhetoric and hefty forecasts through financial products. Forecasts for growth amid uncertainties over trade and recent financial instability likely registers more readily for retail traders. 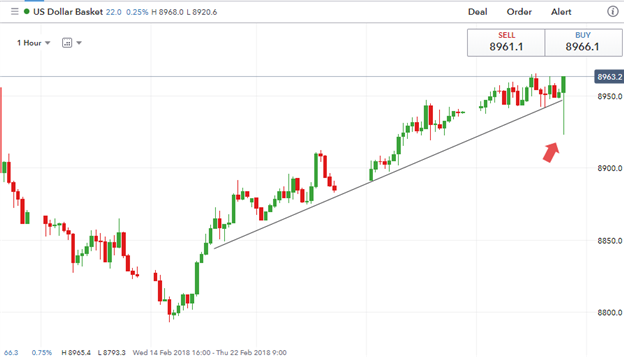 Charts from the IG Platform