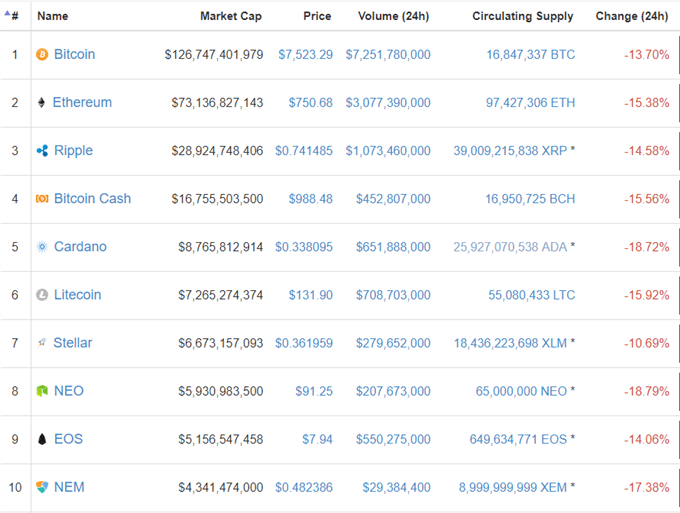 - Price charts show a series of lower highs, a sign that buyers are becoming increasingly reluctant to enter the market.

Another day of double-digit losses in the digital coin market with seemingly little support to help prop up the market. The three largest coins, Bitcoin (BTC), Ethereum (ETH) and Ripple (XRP) are all trading at multi-week lows and have given back a substantial portion of the December rally when prices hit new all-time highs. The charts of all three also highlight ‘lower highs’ being made in the last two weeks, a sign that investors are becoming increasingly reluctant to enter/re-enter the market and are waiting for the market to stabilize. This price action has led to nearly $480 billion being slashed off the overall market capitalization, down from a record $830 billion to a current $353 billion.

We highlighted how the Cryptocurrency Market Was Under Siege at last week’s webinar and we will re-visit the various charts at this week’s webinar on Wednesday at 12:00pm.

While ‘lower highs’ dominate the following charts, the lack of any substantial support on the way down has also kept buyers on the sidelines. While Fibonacci support from the recent up move is prominent, the speed and size of the bullish move has left support levels on the downside far apart, adding little to their ability to halt the slide.

IG Client Sentiment data also confirm that while bullish positioning has weakened in the last few days, clients remain overwhelmingly long of BTC, ETH and XRP. According to the latest report, investors are 72% long of Bitcoin, 89.5% long of Ethereum and 95.6% long of Ripple.

If you are interested in trading Bitcoin, Bitcoin Cash, Ethereum, Ripple or Litecoin, we can offer you a wide range of free resources to help you. We have an Introduction to Bitcoin Trading Guide. In addition we run a Weekly Bitcoin Webinar and have an IG Bitcoin Sentiment Indicator to help you gauge the market and make more informed trading decisions.