- Ripple (XRP) bounces of Fibonacci Support and stays within the downtrend.

- The cryptocurrency market picked back up but has the latest sell-off dented sentiment.

During Wednesday’s Cryptocurrency Webinar, as sellers rode roughshod over the market, we noted that Ripple had become stuck in a downtrend that started on January 4 this year, respecting both sides of the channel. And despite the sharp sell-off, this channel remained in place and provided traders with an important entry point in an otherwise sharp bear market. We also highlighted the 78.6% Fibonacci retracement level, again at $0.86, a level touched twice this week before the price rebounded. XRP currently trades around $1.40, a 60% gain on yesterday’s low trade.

Looking ahead, the downtrend channel should remain in place as trader sentiment has been dented by this week’s heavy losses. The upper bound of the channel is around $1.53 and this should provide initial resistance today, ahead of the 61.8% retracement level at $1.75.

Cryptocurrency Market Recovers Across the Board

After the recent sell-off the cryptocurrency market cap remains nearly $300 billion lower than the ATH of around $830 billion seen on January 7 this year. The ongoing rumors that South Korea and China are going to clamp down on trading and exchanges have roiled the market this year, even though there ae still no official announcements of new measures.And this talk has not deterred South Korean Won (KRW) traders from continuing to pay above market prices for digital tokens. Overnight Korean Won traders were the forth-largest buyers of Bitcoin (BTC) at an average price of $13.415, while KRW traders accounted for a huge 64% of Ripple trade at an average price of $1.69. 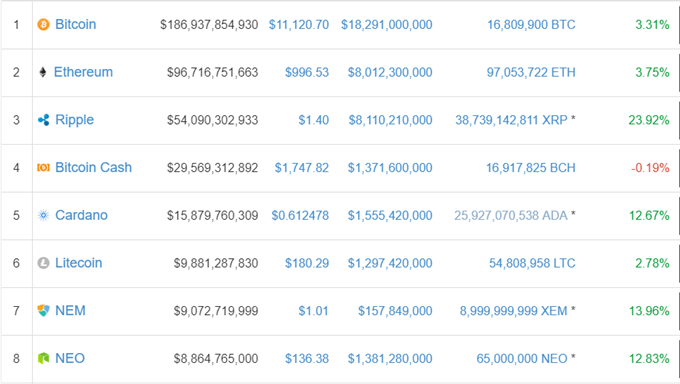 If you are interested in trading Bitcoin, Bitcoin Cash, Ethereum, Ripple or Litecoin, we check out our Introduction to Bitcoin Trading Guide.