- That would support the Euro, already benefiting from a weak US Dollar.

European Central Bank Executive Board member Benoit Coeure and Austrian National Bank Governor Ewald Nowotny have both hinted in interviews that the markets are underestimating the pace and extent of Euro-Zone monetary policy tightening – potentially boosting the Euro, which is already benefiting from the weakness of the US Dollar.

The two members of the ECB’s policy-making Governing Council both suggested that the strength of the Euro-Zone economy could lead to a normalization of policy even though inflation remains well under the central bank’s target of below but close to 2%.

The ECB has already decided to reduce its monthly net asset purchases from €60 billion to €30 billion from this month until at least September, and longer if needed. However, speaking to China’s Caixin Global late last year, Coeure went further, saying: “Given what we see in the economy, I believe that there is a reasonable chance that the extension of our asset purchase program decided in October can be the last.”

Nowotny went further still, telling Germany’s Sueddeutsche Zeitung that the ECB may end its stimulus program this year if the Euro-Zone economy continues to grow strongly. “If the economy continues to do so well, we could let the program run out in 2018,” he said. Underlining this economic strength, data released Wednesday showed Germany’s jobless total fell by more than expected in December, with the unemployment rate hitting a record low.

The two policymakers’ comments come despite Euro-Zone inflation of just 1.5%. “It’s not easy to explain why 1.5% isn’t enough and 1.9% would be better,” Nowotny said. “That’s why I think we should not see that too dogmatically.”

This is all potentially positive for the Euro, which has surged in recent months to its highest level against the US Dollar since September last year. 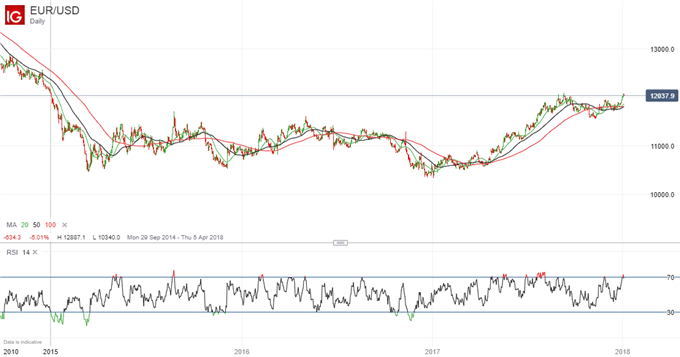 If the 1.2090 high touched on September 8 can be overcome, there is little resistance before the cluster of closes around 1.2250 touched in December 2014.