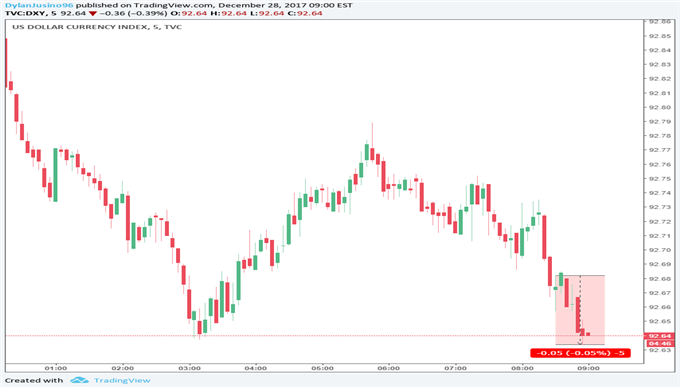 US Trade Deficit Comes in Slightly below $70 Billion; Inventories Rise

- US Advance Goods Trade Balance came in below projections in November at -$69.7 billion; the advanced figure was revised up to -$68.1 billion.

As 2017 comes to an end, the US Census Bureau announced that the international trade deficit stands at $69.7 billionin November which was slightly up from the $68.1 billion deficit in October. Exports were at $133.7 billion, $3.8 billion more than in October. Imports also rose, but by a larger margin of $5.4 billion bringing the total to $203.4 billion in November.

The Census Bureau also reported that wholesale inventories in November, adjusted for seasonal variations (not price changes), increased by 0.7% over the previous month. On a year-over-year basis inventories were up 3.8% last month. Also, October’s inventories saw a slight upward revision from -0.5% to 0.4%.

Retail inventories for November, adjusted for seasonal variations (not for price changes), increased as well, but by only 0.1%. This marks a 0.2% from October 2017 which came in at -0.1%.

For a full-detailed reports from the Census Bureau see the Advance Economic Indicator Report.

Here are the data that is having a limited impact on the US Dollar this morning:

Immediately following the data, the US Dollar Index nudged slightly higher. The slight bump did not last as DXY traded slightly lower (92.64) at the time that this was written.