Keep an Eye on Brexit Timetable When Trading GBP in 2018

- The Bank of England may raise UK interest rates twice more in 2018 but that is largely priced in to GBP already.

- That means the timetable for the Brexit negotiations between the UK and the EU could be the main driver of the Pound in the New Year.

The Bank of England will likely raise UK interest rates twice more in 2018, once in May and perhaps again towards the end of the year. However, with those increases already priced in to the Pound’s exchange rates, they are unlikely to affect the currency unless, of course, expectations change.

The prospect of further modest rate rises should support GBP longer term but day-to-day fluctuations could well depend on the progress of the Brexit negotiations between the UK and the EU, with agreement likely to boost the currency and setbacks to weaken it.

The problem for traders is that the timetable is exceptionally fluid. After the last-minute deal to conclude the first round of Brexit talks on the divorce bill, EU citizens’ rights and the Irish border, negotiations will now turn to the future trading relationship between the two sides.

However, only two dates are firmly in the diary. The most important is March 29, 2019, which has been dubbed “Brexit Day”. The second is the much looser “Autumn 2018”, which lead EU negotiator Michel Barnier has set as the date by which the terms of the exit deal will have to be agreed.

Before that, though, there are several hurdles to jump – the problem being that we don’t know precisely where in the diary they are. First, those agreements on the divorce bill, the rights of EU citizens in the UK and the border between the Irish Republic and Northern Ireland – which is part of the UK – will have to be fleshed out, and at present details are sketchy to say the least. The trade talks are expected to be extremely difficult too.

Moreover, we have had few details so far about the transition, or implementation, period that will follow the conclusion of the talks on Brexit Day. Work also has to continue on pushing the EU Withdrawal Bill through the UK Parliament. Scores of amendments to the Government’s Bill still have to be agreed on and one has already been passed – forcing the Government to give Parliament a guaranteed vote on the final Brexit deal.

That said, the Bill should be passed early in the New Year, which is when the UK and EU negotiators are next set to meet. Much later, the EU Parliament will also have to agree the deal and, later still, the EU Council – consisting of the leaders of the 27 other EU countries – will have to approve it too.

Whether this can all be completed by, say, October 2018 remains highly questionable as the EU 27 will have to agree unanimously, which is a particularly high hurdle to jump.

UK politics will have to be watched closely too. UK Prime Minister Theresa May remains in charge despite many predictions that she would have been replaced by now. That remains a possibility, as does a UK General Election. Any sign that Labour leader Jeremy Corbyn could replace her post-election would likely send the Pound tumbling.

For now, the Pound continues to hold its ground, helped by the current weakness of the US Dollar. Whether that continues in the New Year could well depend on those tortuous Brexit negotiations. So traders will need to tread very carefully, buying GBP on progress and selling it on setbacks. 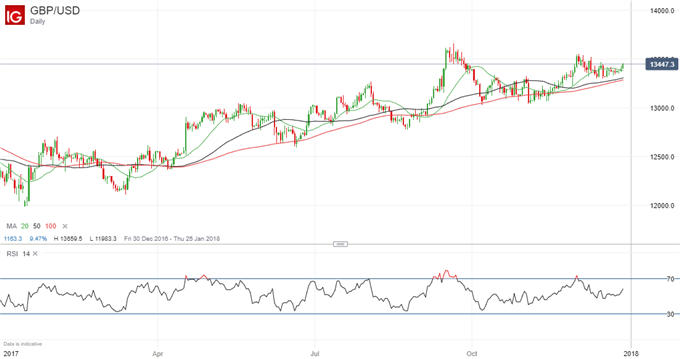 Australian Dollar Tries Lower After RBA Hike by 0.50%. Where to for AUD/USD?
Advertisement