Copper Price Storms Ahead, Pointing to Strong Economic Growth in 2018

- The price of copper has shot up this month, boding well for the global economy next year.

- Moreover, there have been few signs so far of a correction – suggesting further gains remain possible.

The price of copper has surged this month with no indication so far that a correction is on the way. According to Bloomberg data, it has not just reached its highest level since January 2014 but is on course for its longest winning streak since 1989 on optimism about increased demand, supply disruptions in China and a weaker US Dollar.

Sharp price movements in the thin trading sessions between Christmas and New Year are not unusual but copper has been advancing throughout December and remains in a strong uptrend, with one of the few warning signs so far being an overbought reading above 70 for the relative strength index on the two-hour chart. 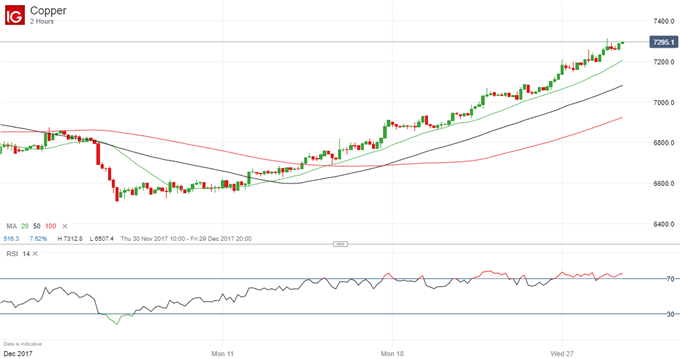 Moreover, the reasoning behind the advance seems sound. China is importing more of the metal to satisfy increasing demand at a time when two major Chinese producers have been ordered to cut their output to tackle local pollution. The world’s largest producer, Chile’s Codelco, has predicted that prices will test their record highs above $10,000 per ton and UBS Wealth Management has also predicted further gains, as has Goldman Sachs.

While a contrarian position can sometimes make sense when faced with a cluster of forecasts like these, it is clear that if the electric car market continues to grow, the demand for copper will too. Moreover, the price has been helped by the current weakness of the US Dollar and the advance can be seen as a positive signal for economic growth in 2018.

Because of its wide use in industry, the metal has been dubbed Dr Copper for its use as a forward indicator of future global economic conditions.