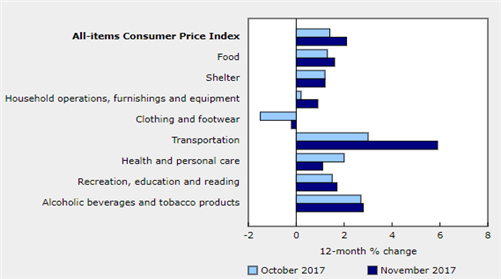 Transportation Leads the Way for Canadian CPI in November

- The Headline Consumer Price Index (CPI)print came in at 2.1% YoY, slightly above the the estimated 2.0%

Headline inflation, measured by the Consumer Price Index, in Canada came in at 2.1% in November. This was a sizeable improvement over the 1.4% print in October but just slightly above the expected 2.0% projection. November CPI was driven by higher costs in transportation at a staggering 5.9% year-over-year increase. This was mainly attributed to a 19.6% year-over-year spike in gasoline prices after just a 6.5% increase in the previous month.

The purchase of passenger vehicles index accelerated as well. The index rose 3.6% year-over-year November, following a 1.9% rise in October. The November increase was attributable to the greater availability of new 2018 model year vehicles.

On the other hand, as transportation costs soared, the clothing and footwear indices declined.

Core CPI came in at 1.8% also slightly higher which was flat over the previous month. Core CPI was revised slightly higher in August from 1.7%. Below is a brief summary chart of how each sector faired over the month of November and October from Statistics Canada:

The Consumer Price Index (CPI) is represents an overall change in the prices of various goods and services experienced by Canadians. It is derived by comparing, over time, the cost of a fixed basket of goods and services purchased by consumers. The CPI is used to gauge the change in the general level of consumer prices or the rate of inflation. Consumers’ purchasing power is directly impacted by changes in prices.

The Next Rate Hike

This month’s CPI was driven primarily by gasoline prices. That does not necessarily provide much of a case that inflation has returned. Gasoline prices tend to be very volatile. Hence, today’s beat CPI print is not a good representation of overall price appreciation in goods and services. Central bankers at the Bank of Canada may look over today’s inflation data.

Below is a list of economic releases that has driven the US Dollar higher against the Canadian Dollar: 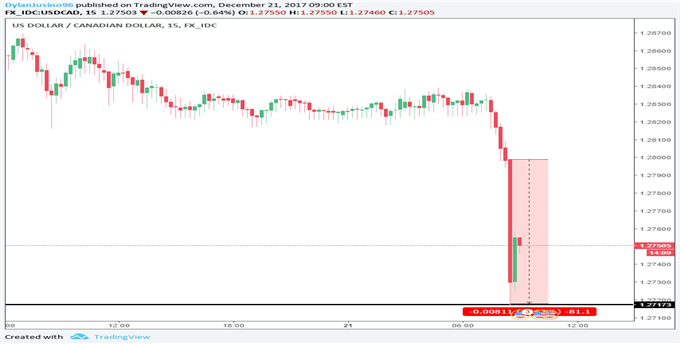 The chart above shows that USDCAD tanked allied about 60 pips following the release of the data. Despite a drop in the retail index, retail sales soared indicating a strong holiday season. As previously mentioned, CPI came in significantly higher last month than in October. At the time that this was written, USDCAD traded around 1.275.