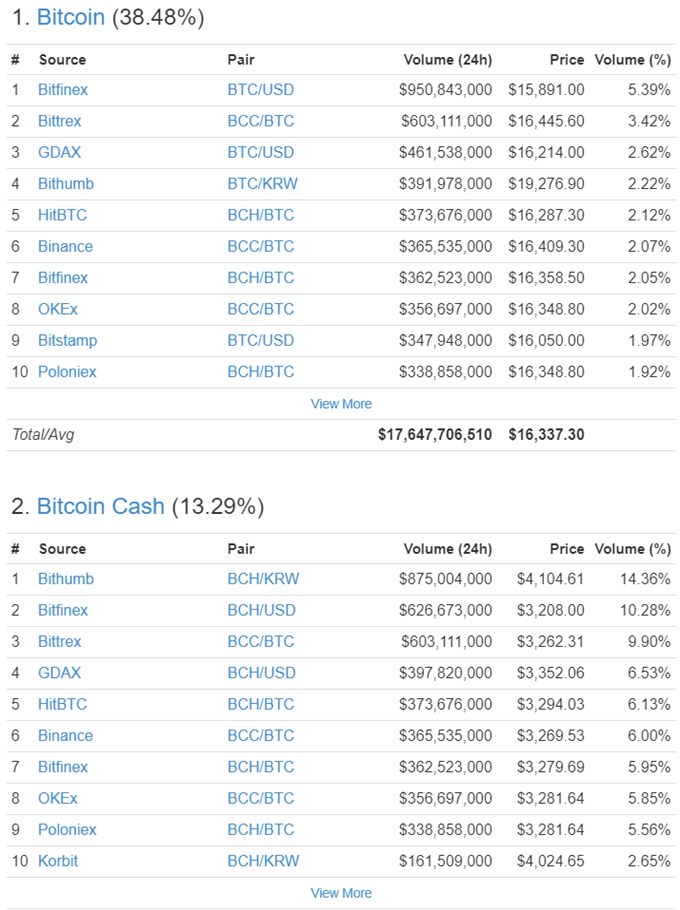 Bitcoin Cash hit a new peak of just over $4,100 on Wednesday as buyers kept pushing the price higher with BTC/BCH switching prominent across a range of cryptocurrency exchanges. With the BTC network under pressure with transaction times slowing down and fees rising, investors moved to the BCH network where the larger blocks (8MB vs. 1MB) and cheaper transaction costs proved too valuable to miss out on. Bitcoin Cash was created, via a hard fork, on August 1 when developers were concerned about the original Bitcoin’s ability to scale effectively.

While the BCH network currently has larger blocks, the BTC network may soon get a block increase to 2MB, via SegWit2x, to help speed and transaction cost issues. The split would create a new coin, B2X. According to a recent interview, Bitcoin.com co-founder and CTO Emil Oldenburg is said to have sold all of his Bitcoin and switched into Bitcoin Cash, saying that Bitcoin’s current performance was unacceptable with slow confirmation times and high performance fees devaluing the token.

Note: Some exchanges have Bitcoin Cash as BCC.

The chart below shows that BCH has outperformed BTC by nearly 200% over the last week and the upward trend line is still intact, opening the way for further gains. The price of BTC may also be negatively impacted if the SegWit2X fork is successful and supported by the Bitcoin community. The current BCH move, along with gains in other altcoins, has seen Bitcoin’s market dominance fall from around 87% at the start of 2017 to a current level of 43.6%. 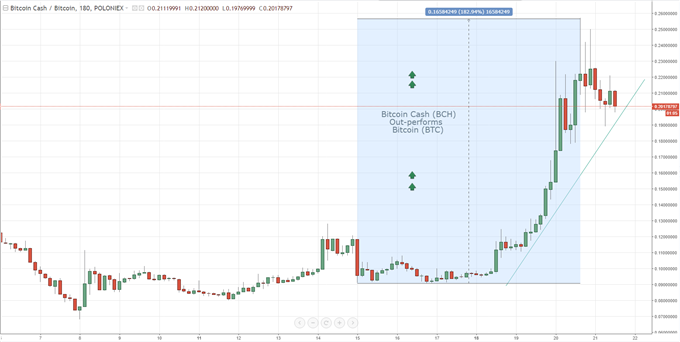 If you are interested in trading Bitcoin, Bitcoin Cash or Ethereum we can offer you a wide range of free resources to help you. We have an Introduction to Bitcoin Trading Guide along with a Free Practice Account. I addition we run a Weekly Bitcoin Webinar and have an IG Bitcoin Sentiment Indicator to help you gauge the market and make more informed decisions.