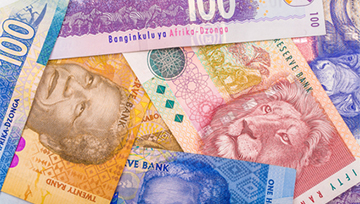 South African Rand Due For a Correction Lower

- The ZAR strengthened before and after the election of Cyril Ramaphosa as the new leader of South Africa’s ruling ANC.

- However, a correction now seems likely following a nine-month low for USD/ZAR.

The South African Rand surged both before and after the election of Deputy President Cyril Ramaphosa as leader of the ruling African National Congress, putting him in pole position to become the country’s next President. USD/ZAR, reflecting the Rand’s strength, dropped to its lowest level since March 27 but a correction higher now seems likely.

From a 2017 high of 14.56 on November 13, USD/ZAR weakened to a low of 12.53 on Monday this week but further Rand strength seems implausible with the “good news” now already priced in. Ramaphosa was seen as the “business friendly” candidate but there are doubts about his ability to push through much-needed reforms. 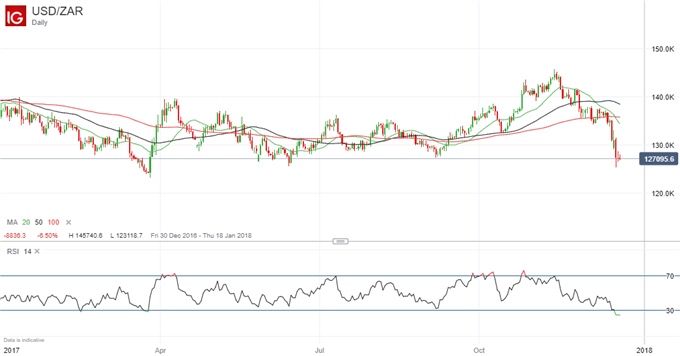 Notably, USD/ZAR inched higher Tuesday and early Wednesday even though the lead sovereign analyst for South Africa at the Moody’s rating agency, Zuzana Brixiova, said that in his campaign Ramaphosa had “articulated a number of broad reform priorities which would, if implemented, begin to address weaknesses flagged when Moody’s placed South Africa’s Baa3 rating on review for downgrade in November 2017.”

Moreover, like USD/ZAR, the yield on the benchmark 10-year South African government bond has already fallen steeply, dropping to 8.660% Wednesday from a high of 9.525% little more than a month ago. This has weakened one of the props for the Rand. It is also not yet clear whether Ramaphosa will be able to deliver the structural reforms seen as necessary for the South African economy to prosper.

Looking ahead, the Rand could yet strengthen further if business sentiment improves, next year’s budget is tight and fiscal reforms are implemented ahead of national elections due in 2019. However, failure on any of these counts could weaken the currency and it is also possible that the South African Reserve Bank could take advantage of Ramaphosa’s election to loosen monetary policy; another negative for the Rand.