- Bitcoin drops around $3,000 since BTC futures were launched on the CME.

- Bitcoin Cash doubles in value this week on transaction issues and Coinbase support.

- Altcoins give back some of their recent gains but remain supported.

This week’s launch of Bitcoin futures on the Chicago Mercantile Exchange (CME) has done little to calm the recent volatility in the price of BTC with prices in the cash market trading in a $4,000 range in the last three days. While the opening CME futures price pointed to prices in excess of $20,000 early next year, the January 2018 contract traded as low as $16,435 Wednesday. Bitcoin futures are a legal agreement to buy or sell BTC’s at a predetermined price on a specific date in the future.

Bitcoin Cash also received a boost when Coinbase, one of the world’s largest cryptocurrency exchanges, said that it would support the coin. This announcement caused sharp market moves and the company is now investigating the price spikes for any evidence if employees violated the company’s trading policies.

Controversial SegWit2x Fork Back in the Spotlight

The original SegWit2x hard fork was pulled in November this year after the Bitcoin community lacked consensus on the split. The 2x fork was supposed to double the block size on the chain to 2MB and change other protocols. Now the SegWit2x project has said that it will carry out this hard fork when block 501451 is reached on the chain, an event that is anticipated to happen on December 28.

And as well as the new fork producing a new, free, coin (B2X) for holders of Bitcoin on a 1:1 ratio, the project developers have also said that BTC holders will receive a ‘proportional number of Satoshi Nakamoto’s Bitcoins as a reward for their commitment to progress.”

The last couple of weeks have seen a variety of altcoins soar to record highs as investors diversify away from the market heavyweights. These moves have fueled yet more talk of a ‘Cryptocurrency Bubble’ as cynics question the extreme valuations given to these new companies. Among the recent altcoin ICOs that have made headlines, IOTA (IOTA) is currently up 490% on the month at $5.32, Ripple (XRP) is up 250% in the same time frame at $0.77 while Cardano (ADA) is up a staggering 1800% at $0.498, giving the nascent company a market valuation of nearly $13 billion. 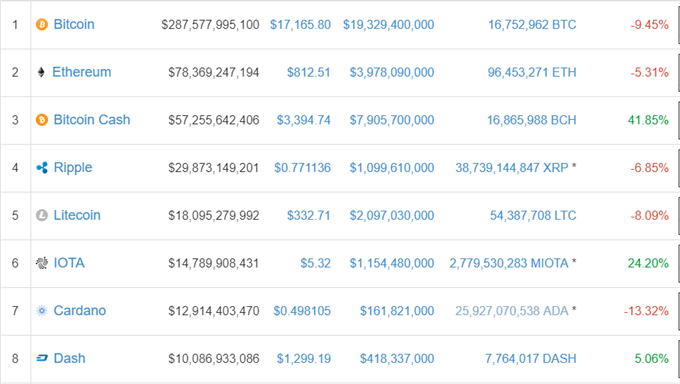 If you are interested in trading Bitcoin, Bitcoin Cash or Ethereum we can offer you a wide range of free resources to help you. We have an Introduction to Bitcoin Trading Guide along with a Free Practice Account. In addition we run a Weekly Bitcoin Webinar and have an IG Bitcoin Sentiment Indicator to help you gauge the market and make more informed decisions.