Euro and DAX to Benefit if German Coalition Talks Succeed

- Both the Euro and the DAX index of leading German stocks should benefit if a stable German coalition government is formed.

- Talks will begin between the country’s two largest political parties but the SPD has left its options open.

German Chancellor Angela Merkel’s conservative bloc is to begin talks with the country’s Social Democratic Party in an attempt to rebuild the “grand coalition” that has ruled Germany since 2013, and success should boost both the Euro and the DAX index of 30 leading German-listed stocks. However, that is by no means certain as the center-left SPD has stressed that it is leaving all its options open.

Merkel’s Christian Democratic Union/Christian Social Union bloc has failed to agree a deal with two smaller opposition parties – the Free Democrats and the Greens – after a Federal election in September that saw the CDU/CSU win its lowest share of the vote since 1949 and the SPD achieve its worst result since World War II. She has therefore had to turn for support to the SPD, which had previously ruled out another grand coalition.

SPD leader Martin Schulz has reluctantly agreed but has left open other options, such as possibly supporting a Merkel-led minority government.

For the Euro and German stocks this is important as another formal coalition would likely be seen as positive while a looser agreement would be seen as negative. Indeed, Merkel has already said that she would see anything other than a grand coalition as a failure. Talks between Merkel, Schulz and Horst Seehofer of the CDU’s sister party the Bavarian CSU are expected to meet this week ahead of talks next month.

News of a possible breakthrough boosted the Euro in Europe Monday and early Tuesday, and has also lifted the DAX, which has inched closer to the record high touched early last month. However, EUR/USD remains well below its near three-year high of 1.2093 reached in early September. 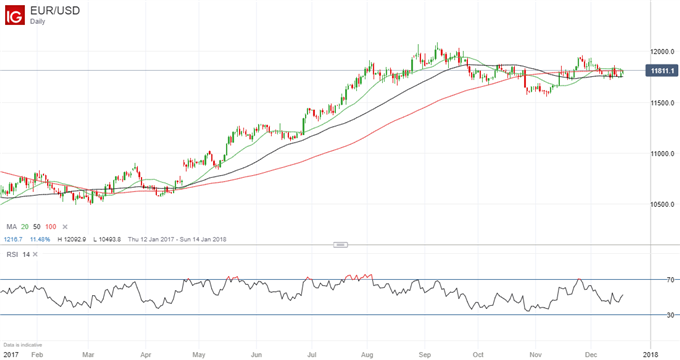