The Australian Dollar struggled to hold on to its gains against its major peers as December’s RBA meeting minutes crossed the wires. The initial push higher seemed to stem from the central bank’s rosy outlook for certain sectors of the economy.

This included that policymakers said recent data had increased confidence that there would be further progress on fronts such as unemployment, inflation and household debt in 2018. The central bank added that wage growth appeared to have stabilized at a low rate and is expected to pick up over time. In addition, data suggested above average jobs growth in next few quarters and output growth is still expected to pick up gradually.

Now for the less rosy side of things. The Reserve Bank of Australia said that the outlook for household consumption continued to be a significant risk given that household incomes were growing slowly and debt levels were high. They left the continued fret that an appreciating exchange rate would be expected to result in slower pick-up in domestic economic activity and inflation than currently forecasted.

Perhaps these concerns prevented a complete Aussie lift off when considering 2018 rate hike expectations. The markets envision an 81% chance that one may happen by next December. So if the central bank sees ups and downs going forward, perhaps AUD/USD’s reaction is quite reflective of that.

In the near term, risk for the Aussie Dollar might depend on how US data unfolds this week with top tier Australian data now behind us. This is because both the Fed and RBA have rates basically aligned at 1.50 percent. If US data outperforms, then improving prospects of 2018 Fed rate hikes might make USD more appealing from a yield perspective relative to AUD going forward. 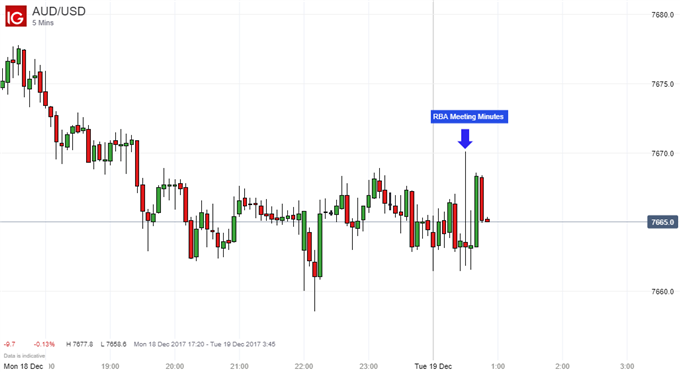 On a daily chart, AUD/USD delivered a bounce since bottoming out on December 8th. Coincidentally, this aligned with a rising trend line dating back to early 2016. However, the pair has been stuck around the 23.6% Fibonacci retracement around 0.7648 for a few days.

A break above this line exposes the 38.2% Fibonacci retracement at 0.7739; and it could also mean that AUD/USD’s downtrend since early September might be in jeopardy.

If Aussie Dollar turns lower, the June 22nd low around 0.7534 might once again come back into play. A break below this would put the December 8th low at 0.7500 in sight as well as the rising trend line discussed earlier. 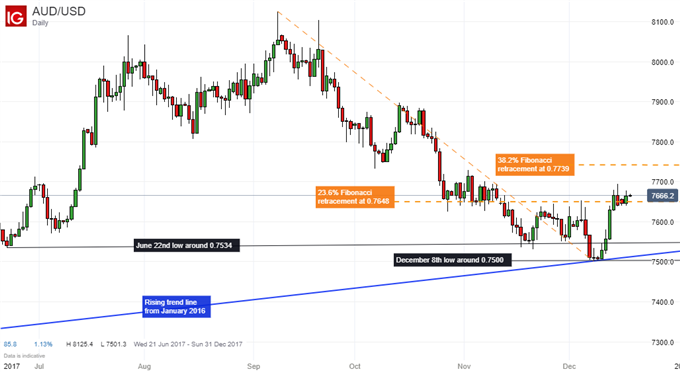