Cryptocurrency heavyweight Bitcoin (BTC) pushed forward in overnight trade, aided by a strong performance in the futures market. The new CME future traded above $20,000 but volume was lowly and the cash price soon slipped into negative territory. The CME futures contract differs from the recently released CBOE offering, with the new contract worth 5 Bitcoins compared to 1 Bitcoin at the CBOE.

While the coin has made huge gains this year, investors are becoming increasingly worried that the market may have run ahead of itself. BTC has increased in price from around $900 to $19,000 this year while Ethereum (ETH) has soared from $8 to $720 in 2017. Concerns are also being aired that some exchanges are becoming increasingly unreliable with difficult access, verification issues and trading outages commonplace when market volatility spikes. Coinbase CEO Brian Armstrong recently blogged that “access to Coinbase services may become degraded or unavailable during times of significant volatility or volume.”

Some of the larger exchanges have also reported denial of service (DDOS) attacks, rendering their websites unusable and investors unable to trade.

Cardano, the ‘Ethereum of Japan’ is the latest altcoin to catch the public eye, jumping from $0.02 to $0.52 in one month. Cardano is a decentralized public blockchain and cryptocurrency project and the company is developing a smart contract platform which “seeks to deliver more advanced features than any protocol previously developed”, according to company’s website. Cardano is now worth in excess of $12 billion.

We will be looking at Cardano, and other altcoins at our Weekly Bitcoin Webinar on Wednesday at 12:00pm. 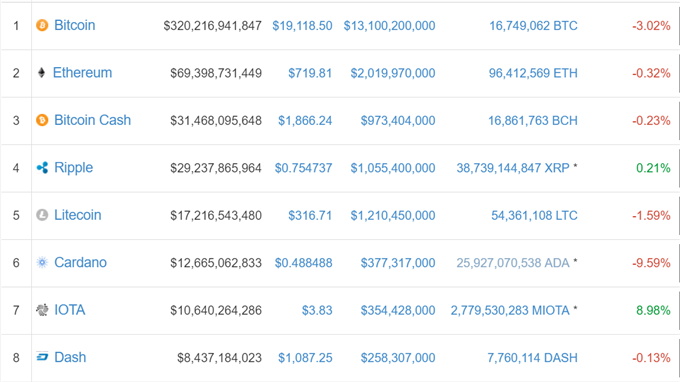