- US wage growth weaker at+2.5% y/y despite the unemployment rate holding at 4.1%, the cycle low.

- The US Dollar ultimately settled lower following the data, dropping from 94.02 to 93.84.

The United States economy saw jobs growth increase by +228K in November, easily beating expectations of +196K, as whatever remnants of the impact surrounding the hurricanes in the third quarter having seemingly passed. Other parts of the report painted a mixed picture of labor force strength. Even though the unemployment rate (U3) held at the cycle low of 4.1%, the labor force participation rate held at 62.7%.

The worst part of the jobs report, essentially nullifying any positivity on the headline, was the wage growth component. Coming in at +2.5% versus +2.7% expected (y/y), this marks another tally in the “disinflation” column that Fed officials have seemingly been adding to in recent months.

As far as near-term rate hikes are concerned, this report has had minimal impact. Fed funds rate expectations continue to price in next week for a rate move, with hike odds holding at 100% after the data (where they’ve been since October 26).

Overall, the November US Nonfarm Payrolls report was a mixed bag that should leave the US Dollar susceptible to a downgrade in the Fed’s inflation forecast and glide path next week. 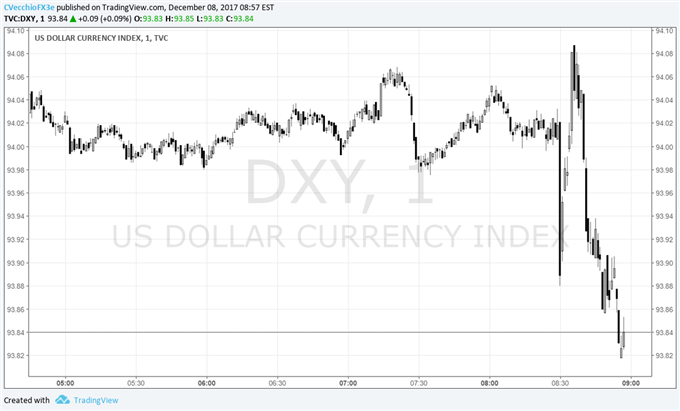 Immediately following the data, the US Dollar traded lower versus the Euro and the Japanese Yen, with the Dollar Index (DXY) dropping from 94.02 ahead of the data to as low as 93.88 before whipsawing back up to 94.09. However, at the time this report was written, the US Dollar had reverted all gains from the past eight hours, with the DXY trading at 93.84. EUR/USD traded between 1.1730 and 1.1769 around the data, while USD/JPY traded between 113.23 and 113.57.

Read more: Preview for November US NFP and Outlook for Key USD Pairs