- BOC holds main overnight rate at 1.00%, suggests that another rate hike might not come until late-Q1’18.

- Canadian Dollar slips across the board; USD/CAD turns to session highs near 1.2750.

The Bank of Canada held their main benchmark rate at 1.00% today, as was widely expected per a Bloomberg News survey (no economists expected a hike). However, rates markets were pricing in a 17% chance of a hike before today’s meeting, leaving the Canadian Dollar on weaker footing in the aftermath of the policy hold.

From the Bank of Canada’s press release, the central bank stated, “Recent Canadian data are in line with October’s outlook, which was for growth to moderate while remaining above potential in the second half of 2017.” Policy makers cited that employment and wage growth has been strong largely due to “robust” consumers spending in the third quarter. Left out from the Central Bank’s commentary was any mention of the Canadian Dollar. The Governing Council left off by reiterating, “higher interest rates will likely be required over time.” 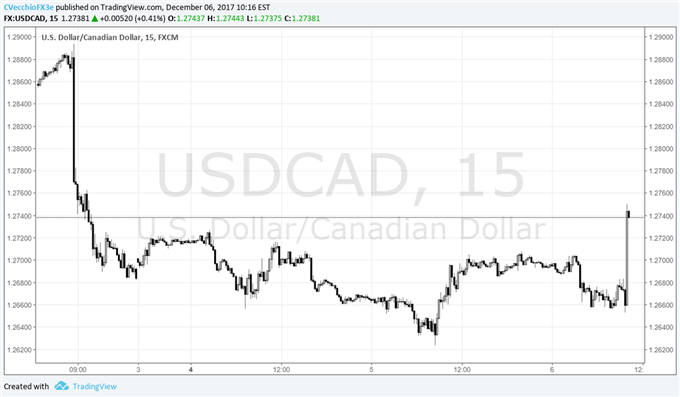 Following the release of the policy statement, USD/CAD turned higher back to session highs near 1.2750. In context of recent price action, however, the move was not considerable; USD/CAD has been trading in a mostly sideways range between 1.2620 and 1.2760 since December 1.

Follow updates regarding the BOC rate decision as well as other data and events moving FX markets in the DailyFX Real Time News feed.